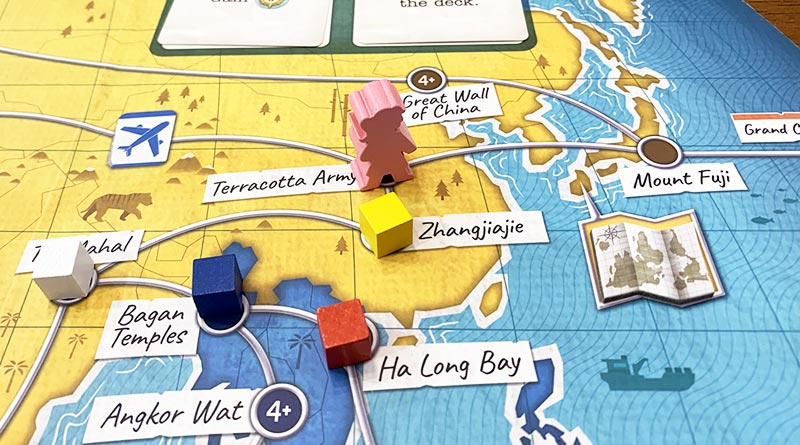 I think we all wish we could be out traveling the world right now.

Traveling is the thing I’ve missed the most in 2020.

We’ve had to cancel two big vacations we’d been looking forward to for a long time. One of those would have been this week. We’re totally bummed that we couldn’t be seeing new sights in Asia right now.

But all hope isn’t lost. We just bump it out for some future, currently unknown, date. We know we’ll get their one day.

And in the meantime, we can jet all around the world in our imagination while we play Trekking the World!

Trekking the World is the latest board game published by Underdog Games. It delivers a lot of the familiar game play from Trekking the National Parks while adding a few new elements we really enjoy.

Trekking the World is an easy to learn family board game where players traverse the continents, visit popular destinations, and collect souvenirs in a race to score the most points.

Then two Journey cards are drawn and placed in the Journey Log space on the board. They can be selected on purpose or randomly drawn. These two Journey cards will be active the whole game. The rest will be placed back in the game box.

Each player chooses a Trekker and places them on one of the airport locations to begin. They also get a Suitcase sheet that matches their Trekker’s color. Lastly, the Trek cards are shuffled and each player is dealt 3 cards to form their starting hand. The rest of the Trek cards are placed next to the board in a draw pile and 4 are placed face-up.

Then players are ready to start traveling!

On a player’s turn, they will get to Move and take an Action.

If a player begins their turn on an Airport location, they may first choose to Fly to another airport as a special pre-turn action.

If able, a player must move their Trekker to another location every turn.

They do so by discarding cards from their hand. They may play 1 or more cards when moving. The combined value of the numbers on the cards is the exact amount of spaces they will move.

When moving, they can’t move through other Trekkers.

If there is a Souvenir cube on the location they finish on, they take the cube and add it to their Suitcase (in the left-most space for that color). If after placing the cube in their suitcase, they have at least 2 of that color and have more of that color than any other player, they claim the Most Souvenir tile for that souvenir.

If the player collects the last Souvenir cube in a Region, they also claim that Region’s Bonus token. They can look at it and keep it face-down next to their suitcase (for scoring at the end of the game).

Once they have moved, the player must choose one of the following actions

1. Draw Two Trek Cards: They may take Trek cards that are face-up (immediately replaced) or draw from the top of the Trek deck.

3. Journey: This action allows players to activate one of the Journey cards on the board. The player must play 2 cards from their hand with matching icons (colors) and then do the actions listed on the Journey card. The actions may include things such as moving X number of extra spaces, moving to any airport, drawing X cards, paying less cards to Take a Tour, or gaining victory points.

Once a player has taken their action, the player to the left takes their turn.

Players continue taking turns until one of the game end conditions occurs:

The player who triggered the end of the game finishes their turn and the game ends.

Players total up their points from Destinations Toured, Region Bonus tokens, Victory Point tokens, Most Souvenir tiles, and sets of Souvenirs (completed columns of souvenir cubes in their suitcase). The player with the most points is the winner!

Can the whole family enjoy Trekking the World?

Just like its predecessor, Trekking the World is a great family board game. And that’s exactly why we included both games in our 2020 Board Game Gift Guide.

It reminds us a lot of the ever-popular Ticket to Ride games where players collected colored cards and then turn them in as set to claim train routes. Only in Trekking the World, players get to do more with the cards they collect. They get to use them for both traveling and claiming Destination cards (Taking a Tour)!

When playing family board games, you might have some impatient players. Those players that don’t like waiting around for their turn. The great news about Trekking the World is that because player turns consist of just moving and then completing one action, turns go very quickly. So there isn’t much downtime between turns.

While the rules are very simple to understand and remember, the game also involves interesting choices along the way.

And we love the balance between luck and strategy.

The luck comes into play first during set up when the colored cubes are distributed to the various locations on the board. The same applies to the random point values of the different Regions. Whereas the colored cubes are known upfront, the point values of the Region bonuses aren’t known until a player gets one. And then it’s only known to that person until the end of the game when totally scores and everyone gets to see it.

And of course, there’s the luck of the card draws and which Trek cards come up. Some players will simply get a lucky swipe of those cards.

But there are also a number of strategic elements to the game.

Since the Souvenir cubes are open information, players can make strategic moves to snag cubes of certain colors to get a particular Souvenir bonus tile as well as for completing sets of Souvenirs. Players can also make strategically timed moves to grab the last cube in a Region to walk away with the Bonus token.

Then there are the Destinations themselves. The row of Destination cards clearly show which types of cards are needed to claim them. And players can pay attention to which Trek cards their opponents are grabbing along the way — giving them an idea of which Destination they’re vying for. So players will need to make choices as to which Destinations are in their best interest to compete for and which are better left alone.

Since the last 2 Destinations in the row also grant extra Victory Point tokens when claimed, players will also want to keep an eye on those cards in particular. Or they can try to time it so that a Destination card that comes up later will make its way to those end spots at the right time for them to grab on their turn.

Lastly, players also have the option of using the Journey abilities at the right time as well. Since those change from game to game, they give Trekking the World great replay value. The general flow won’t change, but a player’s strategy can shift to take advantage of those cards along the way.

Beyond the balance of luck and strategy, the game is a lot of fun to look at!

The components are fantastic and we love the artwork.

The Trekker player pieces are fun to move around the board and the cards are very durable. Plus, each Destination card has a description of the location on the back that’s a nice added touch. If players aren’t planning their next move while waiting for their turn, they can enjoy learning about new locations by reading the Destination cards they’ve claimed.

We’ve also found the game plays well at all player counts. So whether it’s just two of us going head-to-head or a full 5-player game with a crowded board, the game is just as fun.

In 2-player games, players can be further spread out on the board — which can make claiming Region bonuses a little easier. After all, if the other player isn’t on the same continent as you, you can walk away with a lot of cubes. Of course, they can be doing the same in their Region. But you can also judge better at which Destinations they may be able to claim before you.

Whereas, in 5-player games, there’s more opportunity to sweep things out from under other players just before they do — or have that happen to you. So it will definitely feel like a race to grab things while you can.

Overall, Trekking the World is a game the whole family can enjoy playing together.

How does Trekking the World score on our “Let’s Play Again” game meter?

Trekking the World scores high on our “let’s play again” game meter because of its simple and fun game play plus it’s visual appeal. But mostly we enjoy it because of the light strategy involved as we outlined above.

Every game plays out differently because of how the Souvenir cubes get disbursed and which Journey cards are in play.

And of course, it’s a fantastic way to let our minds wander to lands we want to travel to once we’re able to travel again.

Big thumbs up for Trekking the World!

We’d like to thank Underdog Games for a review copy of Trekking the World.

Anniversary: Japan Celebrates 15 Years Of Super Mario Strikers
Watch Doug Emhoff’s Reaction When He Learns That Kamala Harris Googled Him Before They Met
Meeple Land Board Game Review
Jake Gyllenhaal Looks Back at 20 Years of Donnie Darko, the Movie That Changed His Life
Jurassic World 3 Will Bring Entire Jurassic Park Franchise to a Close