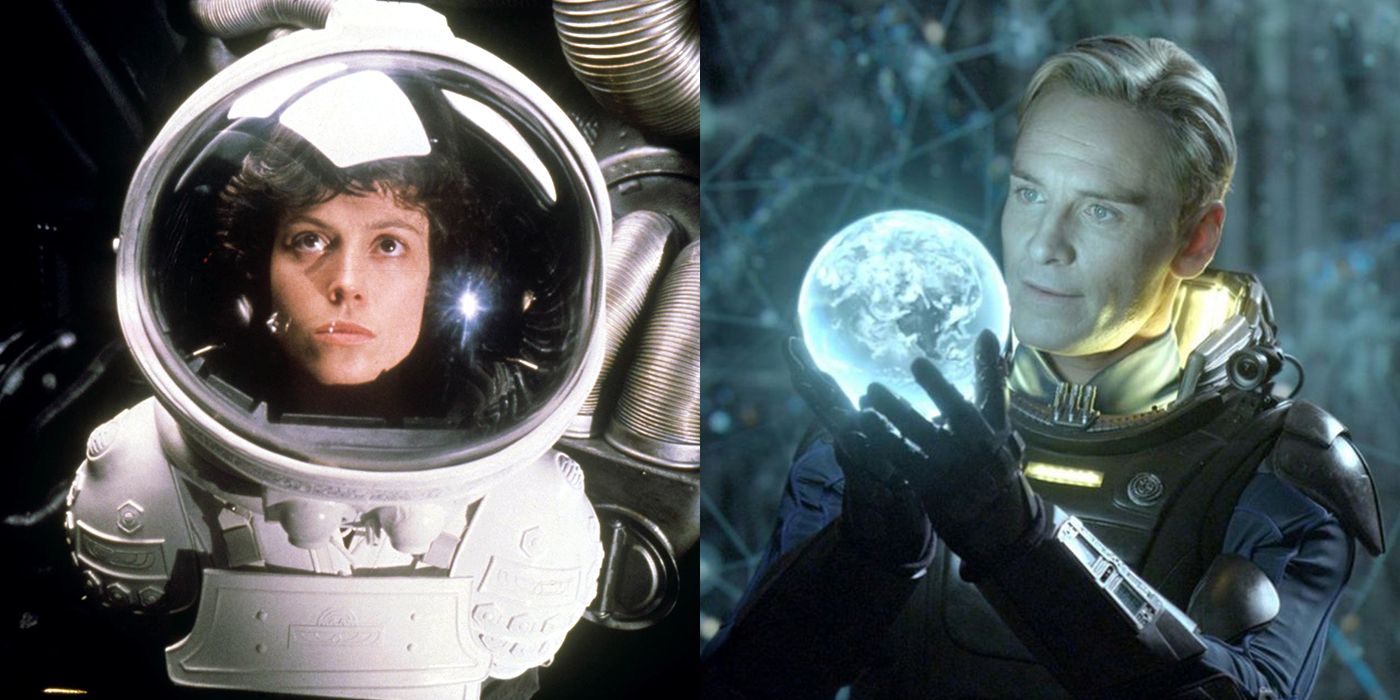 Today, Ridley Scott is one of the most acclaimed directors in the business, with multiple Oscar nominations under his belt, along with dozens of other industry accolades. He’s responsible for some of the most celebrated films of the last half century. But back in the late 1970s, Scott was still a relative unknown with just one feature film to his name when he stepped in to helm what would turn out to be one of the most enduring sci-fi films of all time, Alien.

While Alien occurred early in Scott’s career, many of the characteristics that would come to define the director’s work were already on full display, and he would eventually return to the franchise decades later — a more refined director — with the prequel Prometheus.

If you want to create your own Prometheus / Alien double-feature, the Movies Anywhere’s ‘Biggest. Offer. Ever.’ has you covered. For one week only, you can purchase from thousands of movies (including Alien) and choose an eligible bonus movie (like Prometheus)*. Hurry: the offer – and the Ridley two-fer – ends April 12th. And the best part – once these movies are in your Movies Anywhere collection, you can share your love for these classics with a friend by sending them a Screen Pass**.

On Alien, working off an already tight screenplay from Dan O’Bannon which was then rewritten by David Giler and Warren Hill, Scott brought the sci-fi horror film to vivid and terrifying life through his patient and atmospheric direction, prioritizing the way each scene felt over what was actually happening in it.

That aesthetic approach in Alien makes sense, given that Scott was a production designer long before he was a director. As a filmmaker, Scott has always seemed more focused on the feelings his stories evoked than the details of how they were being told. His production background is on full display in Alien, which opens on long, lingering shots of the sets that make up the interior of the Nostromo, as if Scott is trying to make sure we memorize every detail of the ship before he destroys it later. As the film progresses, characters become increasingly isolated and forced into tighter spaces, building tension and claustrophobia in the audience. While the plot of Alien is pretty simple, the sensations it evokes are complex; we as an audience may not know what it’s like to travel through deep space on a ship with an acid-spewing alien, but (especially in light of the past year) we know what it feels like to occupy spaces that never feel quite big enough for our bodies, and we understand feeling so isolated that it becomes claustrophobic.

Scott has always possessed a unique talent for cultivating this sort of visceral sensation with his work, even when the stories he’s telling don’t entirely work on a cognitive level. But as Scott has evolved in his directorial career, so has his approach to how he engages with those sensations. By the time he returned to the Alien franchise with the prequels Prometheus and Alien: Covenant (which is also an eligible bonus movie) in 2012 and 2017, respectively, it seemed as though Scott was eager to take another stab at the film that in many ways defined his career; only this time, he set out to unsettle viewers intellectually as well as physically, picking at our thoughts with the same patient persistence that he’s so often used to overwhelm our senses.

Watching Alien and Prometheus back to back (and there’s no time like the present to pick up both for the price of one with the Movies Anywhere promotion) offers the unique opportunity to examine a director’s style at very different points in his career, through the lens of a very similar story. In fact, if you read interviews with Scott from the years between Alien and Aliens, in which he mused about what an Alien sequel would look like if he was ever given the opportunity to film one, some of his hopes for future Alien films sound very similar to what he eventually accomplished in Prometheus. Speaking to Omni’s Screen Flights/Screen Fantasies in 1984, Scott said, “[An Alien sequel] certainly should explain what the Alien is and where it comes from. That will be tough because it will require dealing with other planets, worlds, civilisations. Because obviously the Alien did come from some sort of civilisation. The Alien was presented, really, as one of the last survivors of Mars – a planet named after the god of war. The Alien may be one of the last descendants of some long-lost self-destructed group of beings.”

The Ridley Scott of the 1980s envisioned an Alien sequel that leaned far more into the science fiction aspect of the first film’s premise than horror and suspense. He wanted to spend more time debating who the xenomorph was and where it came from, and on the differences between humans and other civilizations. “I believe that audiences love those [discussions], especially if they’re well done,” he said in 1979, speaking to Fantastic Films about the scenes he couldn’t include in the first film. “They give the threat much more weight. If they make Alien II, and if I have anything to do with it, the film will certainly have those elements in it. From a certain point of view, Alien II could be more interesting than Alien I.”

While Scott never got a chance to make the Alien sequel he’d envisioned, he was offered another swing at the franchise with the prequels, and Scott used the opportunity to effectively soft reboot the franchise and set it on the path he’d always wanted it to follow. Despite many of the trappings being different, watching Prometheus on the heels of Alien makes it evident that we are watching a reimagined version of the same story, told through a new lens: A crew awakens from cryosleep in order to go investigate a mysterious alien structure, stumbles upon an alien life form, and it turns on them. Both films feature a man who encounters the alien and seems fine at first, only to then die horribly. Both feature an android on a secret mission for a shady and mysterious organization, who later gets decapitated. Both gradually separate the members of the crew and pick them off, and both end with the female lead heading off into space, the sole human survivor of the crew.

Yet Prometheus is also very different from Alien, opening the door to many of the themes that Scott once said he wished to explore in a sequel. In fact, if Prometheus functions as a sort of proxy Alien, then Alien: Covenant winds up being the sequel that Scott originally envisioned, digging into the nature of the aliens (which, we eventually learn, were actually genetically engineered by an android, who was created by humans, who may have actually been created by the alien Engineers), and exploring other civilizations.

However, instead of digging into the civilization of the xenomorphs as it seemed like Scott had originally planned, he instead pivoted in Prometheus to suggest that androids were in fact the other race worth exploring. In Prometheus, the android David (Michael Fassbender) is by far the most interesting character (developed much more fully than Ian Holm‘s Ash was in Alien), and he evolves even further in Covenant. Perhaps after watching the Alien sequels, which imply that androids eventually begin improving their own designs after humans stop developing their technology, Scott decided that a race of our own making becoming the impetus for our destruction was even more fascinating than an outside species coming to attack us.

Like Alien, Prometheus raises a lot of questions about its world, plot, and characters, some of which are answered in Alien: Covenant; many of which are not. But providing solid, logical answers has never seemed to be Scott’s main concern, in the Alien movies or in any of his other work. And while Prometheus may not be as effective as its predecessor in its storytelling or the intense feelings it provokes, there’s no denying that it delivers on more of the intellectual themes that Scott once said he wished he could explore.

Watching Alien and Prometheus back to back doesn’t deliver a complete picture of the Alien franchise, but it does offer unique insight into what it might have become if Ridley Scott had remained in charge of the sequels. It illuminates the different paths that could’ve been explored, and the ways that Scott has changed and grown as both a director and storyteller.

Taken in context with the rest of the franchise — the three action-packed Alien sequels, and the second, much more cerebral prequel — Prometheus and Alien highlight the vast range of the Alien franchise by essentially telling the same story in two different ways, by the same man at two very different points in his career. One door leads to pulse-pounding horror and adventure; the other to heady musings about human nature and inevitable cycles of creation and destruction. Yet both are branches off the same narrative tree, alternate ways of examining the same story. Ultimately, what’s most impressive about viewing Alien and Prometheus as a matched set rather than as two disparate points in an uneven franchise is in how many layers the two films reveal about the nature of their shared central story, and how distance can sometimes help us view something familiar in an entirely new light.

*LIMITED TIME ONLY. RESTRICTIONS APPLY. Offer expires at 11:59 PM EDT on April 12, 2021. Registration with Movies Anywhere required. Open to U.S. residents 13+. You must purchase a Movies Anywhere-eligible movie from a digital retailer that is linked to your Movies Anywhere account. For complete details, visit MoviesAnywhere.com/bonusoffer.

**Screen Pass-eligible movies are subject to change without notice.