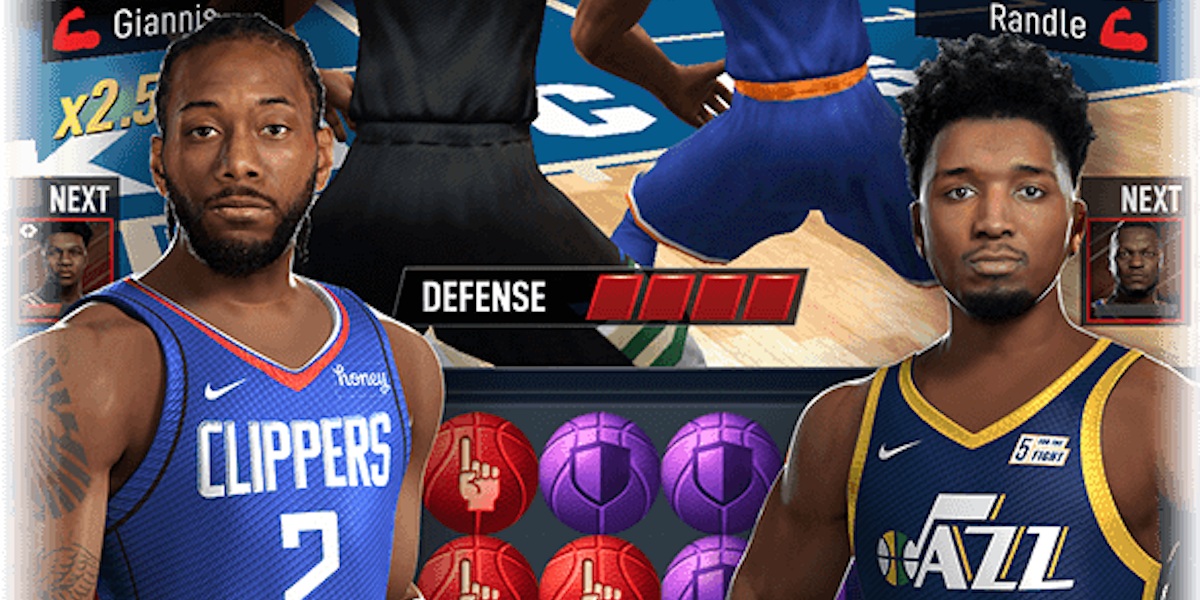 If there’s one thing that total strangers will ask you, if you’re a relatively tall person, it’s, “Do you play basketball?” My answer is almost always genial, but inside I’m laughing at how awkwardly uncoordinated I am when it comes to anything remotely sports-related. Thankfully, sports games bridge that divide between actual athletic inability and at least an average level of game-playing skills. I’ve gravitated more towards professional football and hockey games in the past, but never ventured onto the court for a pro basketball simulator. That all changed when I had the opportunity to become both team manager and star player in the new mobile game, NBA Ball Stars. The new title makes feeling like a baller even easier because it is, in fact, a puzzle game.

Global mobile game publisher Netmarble Corp officially launched NBA Ball Stars today, now live on the App Store and Google Play. The all-new, puzzle-based, mobile basketball game stars 2019-20 Kia NBA Rookie of the Year Ja Morant as its cover athlete in addition to plenty of other notable pro players in the league. If you’re an NBA fan (and you really should be to play this game), you’ll love the chance to draft more notable players onto your team. And you don’t just get to add them to your collection, you actually build a team yourself based on the strengths and weaknesses of each position. You can center it around a superstar or start from the ground up by forming a solid foundation. But the team-building is just part of the content here.

NBA Ball Stars was created in collaboration with the National Basketball Association (NBA) and National Basketball Players’ Association (NBPA), and is the first publishing project for Netmarble’s Los Angeles-based subsidiaries Netmarble US and Kung Fu Factory. That combo of developers brings a curious sort of mix into the game, one that’s part sports simulator and manager, and one that’s part puzzler. You do not need to possess any athletic skill to play this game, you simply have to follow the basic instructions laid out in the tutorial and then, literally, press a couple of buttons. Easy-peasy.

So easy, in fact, that the game quickly becomes more enjoyable for the gatcha process of drafting players than it does “solving” the puzzles. It’s not even a Match-3 type of puzzle but rather a semi-strategic game in which colored gems power up your players on offense or defense, allowing them to use powerful skills to win the game in the final moments. There are 82 games to complete in your first season, much like the IRL NBA, but you’ll only have to field the last couple of minutes per game, making for relatively quick sessions. The sounds, sights, and slam dunks from the NBA’s finest play out in approximated versions of themselves on your mobile screen, which adds an interesting layer to your puzzle play, almost like you’re watching a game’s final moments on the TV.

NBA Ball Stars feels like a decent enough casual puzzle game for diehard NBA fans. That’s an incredibly specific niche of mobile games to aim for, but hey, this game fills that void. I’d recommend it for NBA fans who might want a somewhat mindless puzzler to pass the time on their phone if only to collect your favorite pro players. If you’re just a fan of puzzle games but have no real connection to pro basketball, it’s probably a pass; there’s not much of a challenge here despite the interesting offense/defense/skills mechanics. But if the very nature of the sports game / puzzle mash-up NBA Ball Stars has you interested enough to check it out, hey, the ball’s in your court.

NBA Ball Stars combines star players from the NBA, fast-paced gameplay and franchise-building skills into a strategic, team-based game suitable for general sports fans, casual gamers and players of all levels. Gamers will take charge of their favorite team and make a run for the championship title, choosing from an extensive line-up of NBA players to draft and train. By successfully bursting sequences of matching gems, players control their team and power-up their athletes to execute special shots, steals, slam dunks and more.

Check out the launch trailer below:

It’s here! Check out the hottest new puzzle game featuring your favorite NBA stars. Collect and level up players, build the ultimate team roster, and defeat your opponents to reach the Playoffs. Match gems to power up your shots and take it all the way to the Championship!With a variety of accessible matchups and quick-play sessions, NBA Ball Stars players have full franchise control at their fingertips, including:

Rocky’s story isn’t completely over, though.