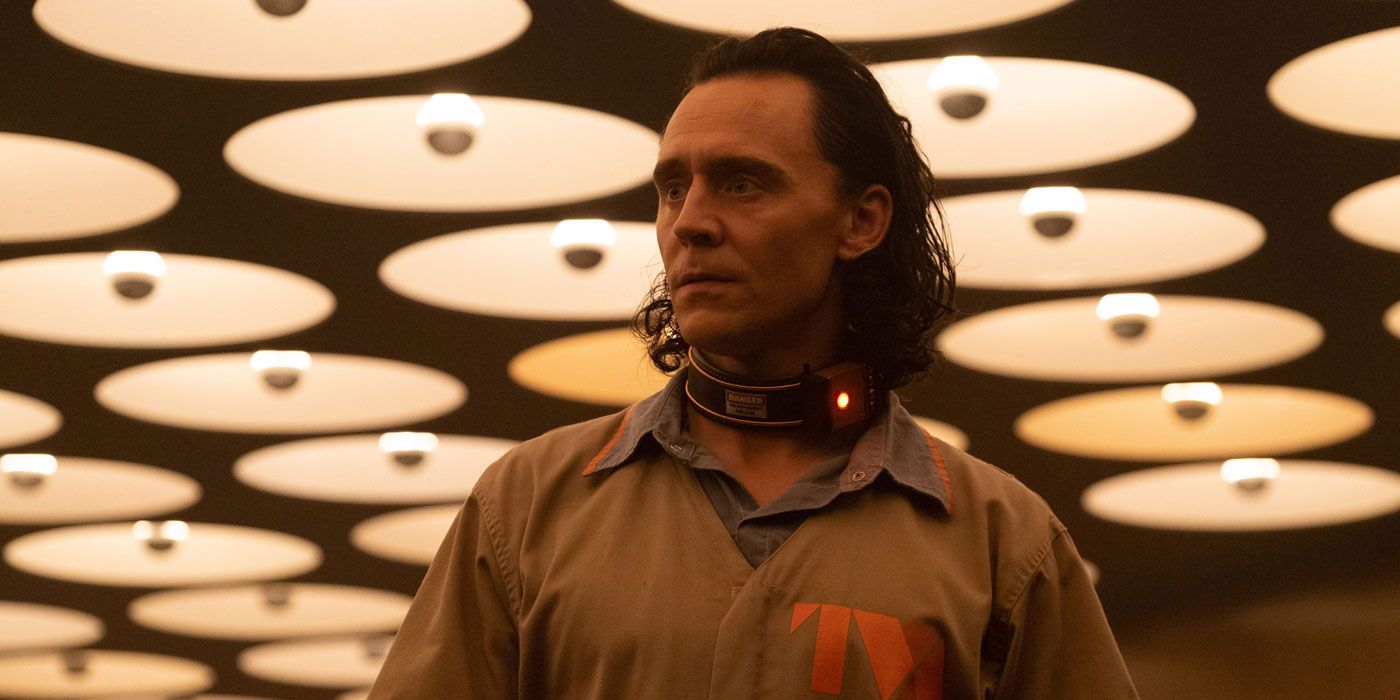 In this age of Zoom interviews, it no longer feels strange to see someone’s cat pop into frame. But in the case of Loki production designer Kasra Farahani and his pal Charlie, it did happen to be apt. That’s because according to director Kate Herron, the cat you might have spotted in Episode 1 was part of his pitch re-imagining the sequence with which the Time Variance Authority would process incoming variants.

“I would talk to Kasra about how his humor infuses his production design,” Herron said to Collider, “because he pitched the idea of the cubes to me. Originally it was like they were these rooms that he was going in, but Kasra was like, ‘Oh, it’d be so funny if they’re cubes, and they have these hatches and he falls through.’ That’s his genius. And the cat in the paperwork chamber, that’s him. He put that in the illustration. And I was like, ‘Man, that’s so funny.’ But that’s just an example of he’s very detail-orientated. And he’s very, very funny,” she said.

In the interview below, Farahani (whose other credits include, as a fun coincidence, the Owen Wilson-starring Bliss) offers up some very fun insight into his work, explaining why touches like adding the cat are key to his approach, how much of what we see on screen was actually physically built for the actors, and what his favorite set pieces are.

Collider: To start, I was lucky enough to speak with Kate Herron recently, and during that conversation she gave you a lot of credit for a number of things, including the design of the cubes for the opening in Episode 1 and the addition of a cat.

KASRA FARAHANI: Yeah, that was a lot of fun. The processing chambers, as we called them, they read very different, initially, they were more… This is Charlie.

FARAHANI: They were more fantastical, and floating around, and stuff. Not only from a logistics standpoint, but also humor-wise, I was pitching this more tactile Terry Gilliam, Brazil, version of it, and it was funny to us that the clerk would have been there forever, and this is kind of born out in the episodes when you see the flashback to kid Sylvie going through the same chamber and the same clerk and the same cat are there, that that guy and his cat had just been there forever. That the cat is such a big part of his world, to the point that the cat’s six feet away from him, but he’s got a coffee mug with a picture of the cat on it. We put those in the illustrations and we were able to sell them to Kate and Kevin Wright, the creative producer, and Kevin Feige all at the same time. It was a big success, it was a lot of fun.

I mean, because I imagine it’s a slightly more expensive choice to make, but it is so visually interesting.

FARAHANI: Yeah, I mean, it’s harder to shoot because cats are not the easiest… They’re not the most cooperative sometimes. But no, I think it always adds life. Generally throughout the design, whether it’s the bowling alley Loki palace, or specifically this clerk in the paperwork chamber, we come up in the art department and we try to come up with these micro narratives about these places. Because it helps us to create specific and fully realized environments, instead of generic looking things, it just helps us to make it richer.

Of course. I mean, I’m sure you’ve been watching people react to the show online — are there details that people haven’t picked up on that you wish they had?

FARAHANI: I think people have been very kind, and they seem to be pretty thorough. What I wonder if they realize, which is because it’s so uncommon these days, is how much of these environments are completely physically built. They’re not set-extended, like so much of the TVA. All those ceilings, which are such a big part of the monolithic stoic, bureaucratic, architectural feel, they exist, they were built physically. Because of the way Autumn [Durald Arkapaw], our DP, shoots so low angle, you see them all the time. It’s one of those things where people are having such a great response to the show, to the look of it, and they may not fully realize why, but I think part of it is because there’s a very tactile and great lived-in quality to the spaces because they do actually exist. The set extension is used more deliberately and sparingly.

Yeah, I think Kate said something to the effect of like… At least for Episodes 1 to 4, about 90 to 95 percent of what you see on screen physically is there.

FARAHANI: Yeah, that’s right. That’s a lot of it. When you’re looking out at the expanse of the TVA, that those things obviously are, they’re set extended. But yeah, a lot of it was in camera, which was important for the actors, and also just, I think, contributes to what is making this look somehow different.

For the time theaters in the TVA, we haven’t seen clearly how many facades there are, but are they all vaguely different?

FARAHANI: There’s a giant, super graphic in the back corner that has the room number on it. An unnecessarily large graphic inspired by mid-century modern super graphics, like Paul Rudolph did, and stuff. Yeah, so if you look at that, if you pay attention, that number is different every time they’re in a different room. So, Loki has one and Sylvie has a different one, and then there’s I think a third one that they’re in at some point, if I remember correctly. The design of them is the same, these time theaters are essentially interrogation rooms. They’re the same, but the number changes depending on which floor they’re on.

This is kind of an abstract question, but there are so many great, clear influences you’re drawing upon from the past. From your point of view, what is it about doing that in such a deliberate way that makes it feel almost in a way futuristic?

FARAHANI: Well, I think what makes this feel at once familiar and foreign, I hope, is that the TVA is born of a very broad range of mid-century modern influences. So, for example, the spaces have this massive imposing, intimidating scale, and that’s influenced by English brutalism, and mid-century modernism that you saw in Eastern Europe, that’s influenced by Soviet architecture. That’s driving some of the way these spaces feel architecturally, but then their surfaces are treated more like American mid-century modernism, which is warmer in color, and zany patterns, and stuff.

So, the result is that you’re creating these spaces that have this kind of paradoxical feeling of being at once inviting and very intimidating. Then you bring into that this aberrant, anachronistic technology that they have from different… It’s almost like analog technology never stopped, like digital technology never existed, but analog technology continued to get more and more sophisticated, and capable of more and more. So, you have this high functionality, and yet in terms of the vernacular of it, the tech has an analog, tactile quality still. So, that’s kind of the way we’re trying to create something that feels familiar and totally foreign and strange at the same time.

I’ve heard from other production designers that one of the harder things to source is CRT monitors — was that something that you faced?

FARAHANI: We did not use any CRT monitors, we built ours. So, the Chronomonitors that you see is a seven foot wide screen that we built. The graphics on it, we designed separately and were added in post-production. So it’s not a functional monitor. But yeah, it’s a tricky thing actually, because CRT monitors or tube televisions, generally, especially if you’re trying to get an analog quality, an old vintage analog quality, it’s very difficult to run play back through. If you were to get… Sometimes they now have old TVs that have been gutted and have new guts in them, so you can do playback. But it doesn’t have all the weird distortion that makes it feel truly old, which is why we didn’t do it that way.

So to wrap things up, if you had to pick a favorite between your children, what is your favorite set piece or detail from the show so far?

FARAHANI: Very tough to say, I’d say… There’s a couple of different things I’ll mention, like the Miss Minutes queue with the slammed down ceiling that’s super low, it’s like 7’6″, which is six inches lower than the shittiest apartment you’ve ever been in. It’s filled with these eyeballs that are cut into the ceiling, so it’s this matrix of eyeballs, like they’re being watched. The time theater, I love the matrix of these square shafts of light creating this forest of light columns. Then finally, the Loki palace in Episode 5, I love the strange bowling alley deleted from time, filled with a throne from a mall Santa. That one’s got so many different, crazy Easter eggs in it. I love them all, but those three, if I had to say.

KEEP READING: ‘Loki’ Director Kate Herron on Her Original Pitch, Existential Crises, and the One Sylvie Detail You May Have Missed

Here’s Jennifer Lopez Posing in a Tiny Bikini on a Yacht, as One Does When You’re J.Lo
Talking Point: Every Pre-BOTW 3D Zelda Now Has A Remake, But Which Is Best?
Free kebabs for Covid jabs! Le Bab is offering the ultimate post-vaccine pressie
Eiza González Shines As Bulgari’s Newest Ambassador
Family-Style Dinner Review: ‘Ohana Means ???