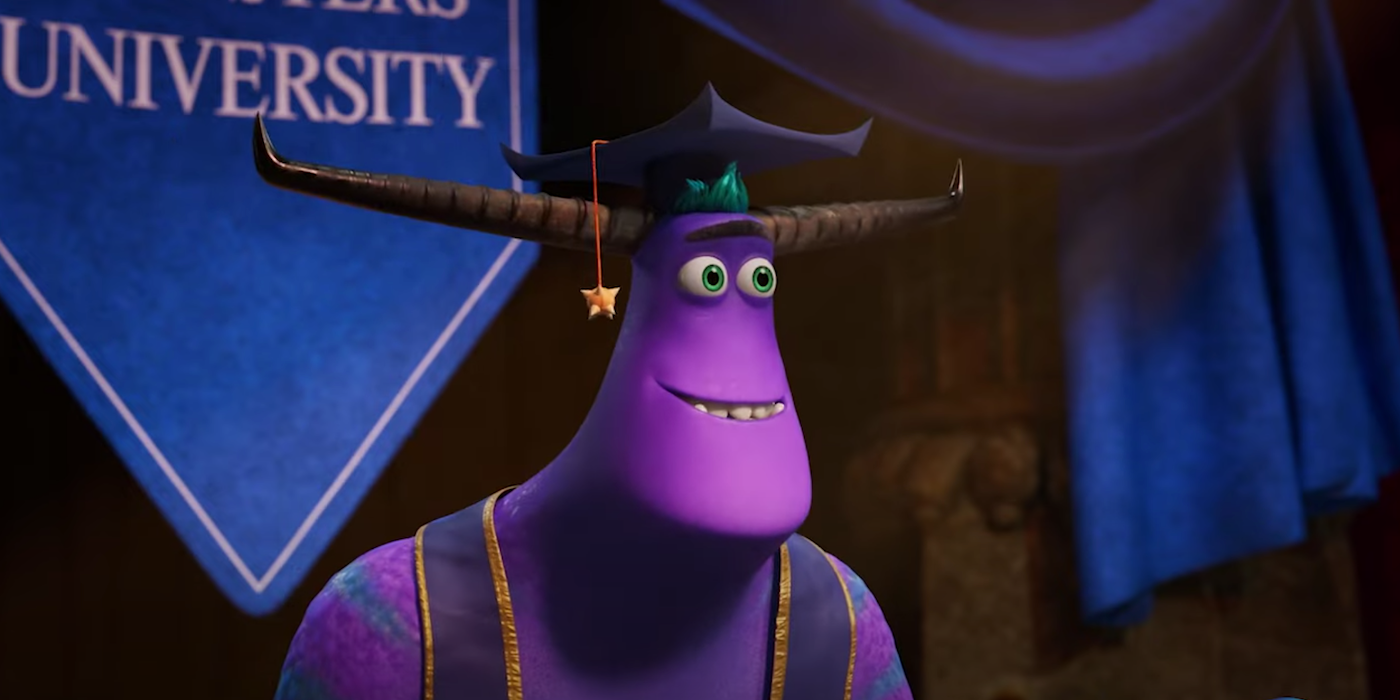 Disney+ has released a deleted scene from their new Monsters, Inc. spinoff series, Monsters at Work. The scene shows Tylor Tuskmon (Ben Feldman) delivering a moving commencement speech at Monsters University, where he expresses why scaring is so important to him.

It’s a touching moment, made all the more poignant by our knowledge that the events of Monsters, Inc. will make scaring obsolete. But beyond establishing Tylor’s expectations for his life after college, the scene also works to further develop his world. We get a closer look at his mother, Millie Tuskmon, voiced by Aisha Taylor. We also catch our first glimpse of his father, Bernard Tuskmon, voiced by Pixar fixture John Ratzenberger. The scene also features a blink-and-you’ll miss it cameo of Scaring 101 instructor Professor Knight (Alfred Molina) from Monsters University.

RELATED: Every Pixar Movie Ranked from Worst to Best

Of course, everything has changed by the time Tylor arrives at Monsters, Incorporated. Scaring is out, Mike Wazowski (Billy Crystal) and James “Sully” Sullivan (John Goodman) are now in charge, and Tylor is shunted off to the facilities team, working alongside misfits like Fritz (Henry Winkler), Fal Little (Mindy Kaling), Cutter (Alanna Ubach), and Duncan (Lucas Neff).

The deleted scene helps clarify what scaring means to Tylor and does a lot to connect the first episode’s cold open of him at school with the rest of the series, set after the events of Monsters, Inc. Moreover, it helps establish Tylor as humble and deferential in spite of his academic successes and promising new career. He isn’t just a gifted scarer, he’s a charming, thoughtful young monster, eager to share praise with his fellow students. He’s a monster we can root for, even if things keep taking unexpected turns.

New episodes of Monsters at Work arrive on Disney+ each Wednesday. The first three episodes are available for streaming now. Check out the deleted scene below.

Here’s the official synopsis for Monsters at Work:

Monsters At Work takes place the day after the Monsters, Incorporated power plant started harvesting the laughter of children to fuel the city of Monstropolis, thanks to Mike and Sulley’s discovery that laughter generates ten times more energy than screams. It follows the story of Tylor Tuskmon, an eager young monster who graduated top of his class at Monsters University and always dreamed of becoming a Scarer until he lands a job at Monsters, Incorporated, and discovers that scaring is out and laughter is in. After Tylor is temporarily reassigned to the Monsters, Inc. Facilities Team (MIFT), he must work alongside a misfit bunch of mechanics while setting his sights on becoming a Jokester.

KEEP READING: ‘Monsters at Work’ Cast and Executive Producer on Returning to Beloved Characters and the Show’s Timeline

‘Loki’ Season 2 Confirmed, But When In the MCU’s Timeline of Madness Might It Happen?

It’s going to be a wild few years in the Marvel universe, y’all.

Check out Eggslut’s intense edible breakfast bacon cloud
How to Watch Old: Is the New Shyamalan Horror Movie Streaming?
BUSINESS TRIPS AROUND THE WORLD ON A RECOVERY COURSE
Mena Suvari Wants to Be Roasted For Her Past
Guild Wars 2’s End of Dragons Expansion Gets New Trailer and Release Date