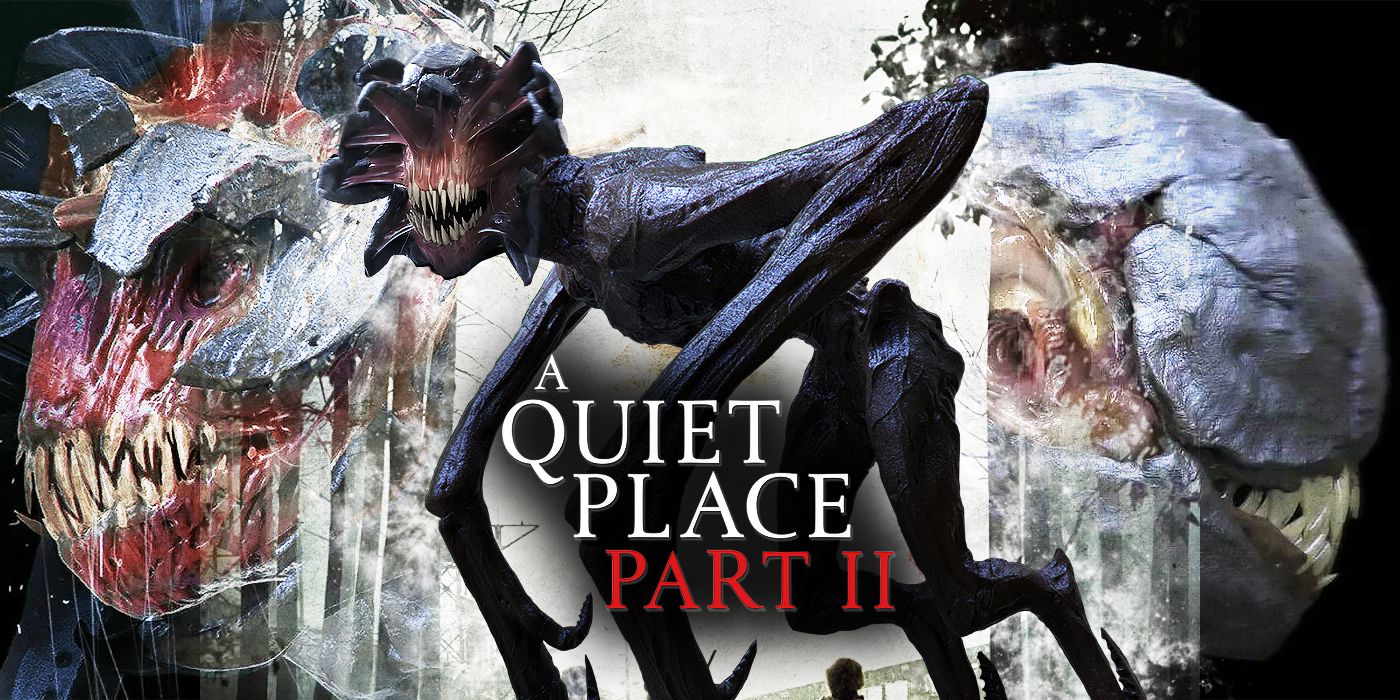 In 2018, John Krasinski’s turn from actor to director surprised audiences and critics alike in A Quiet Place. Krasinski demonstrated a careful mastery of sound design and tension and introduced audiences to a post-apocalyptic world full of monsters who prey on anything that makes a sound. The premise made for a unique theater-going experience as audiences, much like the film’s characters, felt pressured to keep still and silent. This past year, A Quiet Place Part II finally hit the big screen as theaters found some footing in the post-quarantine world. Just as audiences reacquaint themselves with the outside world, the sequel continues the Abbott family’s story as they leave their home to see what’s left of society. As the movie’s world and stakes build, the more we get to know about the monsters that started it all. The sequel adds to the list of the alien monsters’ weaknesses and, perhaps, hints at humanity’s best chance at fighting back against them.

First, we know what the monsters are good at. The opening scene of the first film establishes this effectively. As the Abbott family retrieve supplies from the pharmacy and travel back through the woods, their youngest son Beau retrieves a toy rocket ship with its batteries. When he turns it on, the toy’s beeping and blaring sounds attract one of the monsters, which gets to Beau before his father can reach him. This scene establishes the emotional stakes of the Quiet Place franchise and showcases the imminent threat that the monsters pose. If a monster senses any sound louder than a meager breath, it can instantaneously find and kill whatever made it.

RELATED: Watch: John Krasinski Breaks Down How They Shot the Opening Scene of ‘A Quiet Place 2’ in Exclusive Clip

In A Quiet Place, Lee Abbott—played by Krasinski himself—studies the monsters for a way to stop them. Lee knows that they are blind but have acute hearing. They also have impenetrable armor that makes them impervious to weapons. Coupled with their keen sense of hearing, the monsters’ armor makes them almost unbeatable. The only advantage Lee learns and imparts onto his older son Marcus, played by Noah Jupe, is that the monsters won’t follow smaller sounds if they are masked by something louder, like a running river or a waterfall. However, this knowledge doesn’t provide much of an advantage later on in the film.

Once his wife Evelyn, played by Emily Blunt, gives birth to their baby boy, Lee and Marcus venture back to the farmhouse. While Lee tends to his wife, Marcus reunites with his sister Regan, played by Millicent Simmonds. Regan, who is deaf, has been flustered by her father’s attempts to repair her cochlear implants, which are meant to help her hear. Instead, all Regan hears are painful screeching noises. Just as a monster is about to attack, the same painful screeching scares the monster away. The cochlear implants might have been meant to help Regan hear, but just as the high-frequency noises hurt her, they are also shown to hurt the monsters.

This realization comes too late, however. When a monster threatens his son and daughter, Lee sacrifices himself, screaming aloud so that Marcus and Regan can escape. It’s only when Regan and her brother have made it to the basement with their mother and newborn sibling that she makes the connection between her cochlear implants and the monsters. As the monster inches closer, it is irritated by the static coming from the various televisions and its protective armor peels away. Regan acknowledges this and begins to strengthen the frequency of her implants and places them in front of a microphone. Her mother Evelyn catches on, cocks her shotgun, and kills the monster.

A Quiet Place Part II is a direct continuation of the first film. Though without Lee, the Abbotts leave their farmhouse with the knowledge of the monsters’ vulnerability to high-frequency sounds. Regan carries around a speaker to amplify her implants’ frequency just in case they run into more monsters. And just as they do, they encounter an old friend from before the apocalypse, Cillian Murphy’s Emmett, who helps the Abbotts find safety in his underground factory bunker.

When Regan hears Bobby Darin’s “Beyond the Sea” on the radio, she figures that the broadcast is a message for other survivors to go, literally, beyond the sea to a nearby island. While her mother tends to an injured Marcus and the newborn, Regan packs her things and follows the song’s message, hoping that she can pass on the knowledge of the monsters’ weakness and even broadcast her implants’ frequencies more broadly at the radio station.

Despite his protests, Emmett is convinced by Evelyn to retrieve Regan. When he finds Regan, however, she remains resolute. She believes going to the island is the only way to save her family and everyone else in the world. Inspired by her perseverance, Emmett goes with Regan, but not without trouble. While Evelyn fights off a monster to protect her older son and newborn back at the factory—by activating the fire sprinkler system in the same way Lee used the waterfall as soundproofing in the previous film—Emmett and Regan fight off a depraved group of humans, and the alien monsters that hear them, before making it to the island by boat.

Regan was right. The island is an idyllic community free of alien monsters. Djimon Hounsou plays the community’s leader, who explains how the monsters aren’t able to swim, which is how the people made it safely to the island. He agrees to let Regan use the radio station to broadcast the frequencies. However, a lone monster makes it to the island on a stray boat, wreaks havoc, then pursues Regan, Emmett, and the community leader to the radio station. While Hounsou’s character dies offscreen, Regan and Emmett make it to the recording booth where the monster follows. Before the monster attacks Emmet—and simultaneously, another monster pursues the Abbotts back at the factory—Regan replaces the record playing “Beyond the Sea” with her cochlear implants. The screeching frequencies give Regan and Marcus enough time to kill their respective alien predators.

By the sequel’s end, we know of two specific weaknesses. First, the monsters are vulnerable to high-frequency sounds that make their outer layer pervious to gunfire and other weapons. Second, the monsters can’t swim. This second weakness can also be related to their ignorance of minor sounds around running water. Of course, one would hope that Krasinski is aware of how M. Night Shyamalan’s Signs gave its aliens a similar weakness to H2O. Regardless, all this information can provide clues as to how the next Quiet Place can play out.

One possibility can expand upon the ending of Part II. Regan and Emmett already have a radio station broadcasting the signal, and they can use it to contact other communities and inform them of their newfound advantages. Another possibility involves the sound of running water. While we’ve seen this demonstrated in scenes involving rivers, waterfalls, and fire sprinklers, we’ve yet to see how the monsters react to rain and thunderstorms, which can provide the perfect safeguards for humans to venture out in the open. There are a number of creative ways humans can use this information to defeat the monsters. Maybe it’s simply a matter of luring the monsters into a dam and instantaneously flooding them.

But as most monster movies go, the creatures function as allegory for humanity—people are the real monsters. In the first film, an old man kills a woman in the woods. He screams, despite Lee and Marcus imploring him to keep quiet. The old man, of course, dies. In the sequel, a band of depraved men use a young girl to lure other helpless humans. And when Djimon Hounsou’s character narrates how he got to the island, he describes how only two boats out of twelve were able to get off the dock as people fought their way ahead of line. As Emmett explains to the Abbotts, “The people that are left are not the kind of people worth saving.” But there are still good people who’ve kept their humanity, as Emmett learns. He himself, throughout the sequel, goes on a journey to rediscover his own.

If there’s any chance at defeating the monsters, it’s only if the fractured communities work together. It’s cheesy, yes, but if the third installment continues to approach the story and its characters with a skillful reverence towards horror, then the Quiet Place trilogy can achieve a satisfying ending. John Krasinski has already tapped Jeff Nichols (Mud) to direct a spinoff. Even in his sci-fi drama Midnight Special, Nichols demonstrates a serious approach to high concept storytelling. It’s safe to assume he’ll similarly keep the next Quiet Place grounded, but we’ll just have to wait until the trilogy’s conclusion to find out.

KEEP READING: John Krasinski Teases Future of ‘A Quiet Place’ and Explains Why He Hired Jeff Nichols to Direct the Next Movie

Zukerman also explains why Solomon was destined to follow this path.

Patrick Caoile is a freelance writer for Collider. While he calls New Jersey his home, he is now pursuing a Ph.D. in English–Creative Writing at the University of Louisiana at Lafayette. When he’s not at a theater or investing hours in a streaming service, he writes short fiction. His recent short story can be found in storySouth.

Here’s Jennifer Lopez Posing in a Tiny Bikini on a Yacht, as One Does When You’re J.Lo
You Can Now Pre-Order Sonic Colors: Ultimate On The Switch eShop
Splitgate Release Date Delayed Because Beta Is So Popular
The Good Fight: See Elaine May as Ruth Bader Ginsburg
Movie Review: Dwayne Johnson and Emily Blunt Take a ‘Jungle Cruise’