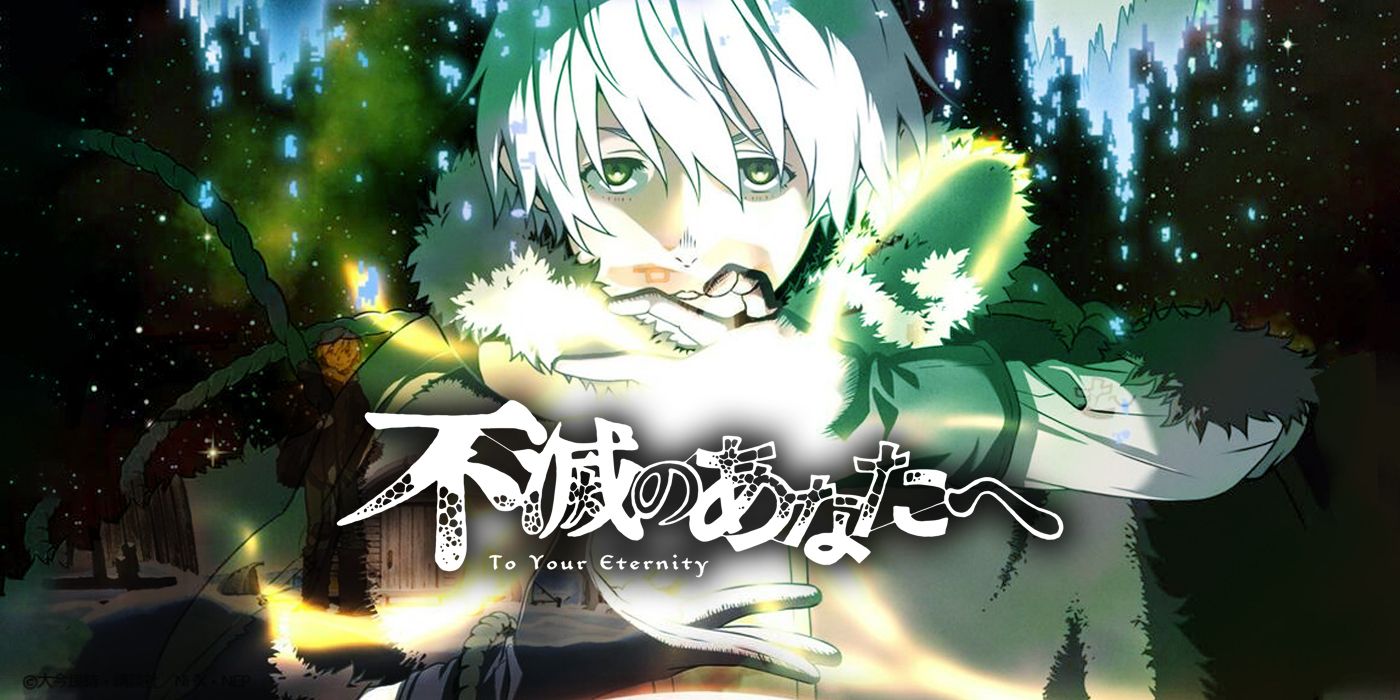 After stunning fans with her debut manga A Silent Voice, creator Yoshitoki Ooima has taken the world by storm again with her sophomore effort To Your Eternity. Where A Silent Voice was a grounded story about kids in high school dealing with relatively normal problems, To Your Eternity goes in a more fantastical direction, following an initially personality-less orb as it experiences all the highs and lows of life and evolves from those experiences. As the being, eventually named Fushi, seems to be immortal, it’s only natural that his long life comes with many meetings and partings as he continues to be shaped by the people he meets along the way.

It’s the latter part, though, that seems to get the most attention from fans – the partings. Understandable, really. Fushi’s first major experience comes when a wolf he is following dies, and he takes the wolf’s form upon its passing. Then, by the end of the first episode, we already have to give a tearful goodbye to Fushi’s first human companion, the boy who he ends up basing his usual look on for the rest of the show. This sets the tone for the series, letting us know it’s going to be a tearjerker. From the precocious kid March, who acted as Fushi’s mother figure, to Gugu, the boy whose unfortunate accident left him scarred, it’s almost a joke at this point for fans to say “no, stop meeting new people!” because we all know what the fate of Fushi’s friends will be.

This caused To Your Eternity to have a reputation it doesn’t deserve – the idea that it is defined by tragedy and death, that characters are introduced just to be killed off simply for audience sympathy. It’s not completely unwarranted – each arc so far has ended with Fushi’s main friend dying, and Ooima doesn’t hold back, willing to kill off any character regardless of age or status. To Your Eternity is a story about the power of emotions and how those emotions form us, in a literal sense for the shapeshifting Fushi. Loss and grief are naturally going to be a major part of that, as those are two of the strongest and most formative experiences anyone can go through. It’s no coincidence that Fushi’s various forms are all people who have since passed; his memories of those people inform his development as a character and the themes of the story as a whole in a meaningful way.

What is lost in all of this is the in-betweens, the events of each arc that make the inevitable deaths feel impactful in the first place. While it’s easy to be drawn into the tragedy of each story, the majority of each arc is actually about Fushi’s positive experiences. The Boy teaches him about the value in pursuing goals and desires; March shows him that he is worthy of love; Gugu, the importance of embracing the things that make him different. These things that Fushi learns are the truly important themes in To Your Eternity, and without them the whole story would fall apart.

In fact, recent developments have only made this more clearly the intent of the story. Fushi has been haunted by mysterious monsters called Nokkers that seem bent on causing trouble for humanity, appearing wherever Fushi is to disrupt his peaceful life. Now it turns out the Nokkers can erase his memory of his loved ones, which takes this theme and makes it text. It may have been sad when March died, but Fushi struggling to remember her, even being unable to turn into his March form is arguably even more heartbreaking, highlighting how it’s the experiences with his friends that are truly valuable. As Pioran said in episode 13: “We’ll only be truly dead once we’re forgotten”. She even makes a direct reference to the idea of a “second death”, more permanent and important than your mortal one, which happens when no one is still around to remember you. As long as Fushi keeps the memory of those happy times in his heart, those characters are still “alive” in an important sense.

Spending time with these characters, empathizing with their struggles, enjoying their company despite knowing that we will eventually separate from them is what makes the series special, because it’s also what makes life special. We all know that things are temporary, but that doesn’t diminish the things we experience and learn from each other; if anything, that temporary nature makes those things more special. Fushi is going through an extreme version of this universal experience, where he is literally shaped by his meetings and partings, but it resonates with us so deeply because it’s true, and ultimately positive. If To Your Eternity was as simple as a story where a guy goes around and people die, no one would still be following it, but it’s more than that. Yoshitoki Ooima’s work is frequently sad, but instead of being a tearjerker, To Your Eternity should be praised as a show celebrating how special and unique life is.

KEEP READING: Every Pixar Movie Ranked from Worst to Best

From capes and heat vision to hoodies and fists, these are the best superheroes you’ll find on Netflix.

David Lynn is a freelance writer and lifelong anime fan who, for better or worse, has been watching every seasonal anime to come out for over a decade now. When he isn’t busy catching up on and writing about the newest cartoons, he can be found playing Fate/Grand Order and complaining about having no free time.

Best NieR Songs in the Franchise, Ranked
Scrapped Wii “Bulletin Board Channel” Uncovered In Nintendo Gigaleak
It’s really happening: sign up for the pre-sale for Mark Rylance in ‘Jerusalem’
The Empty Man Ending Explained: What Really Happened?
My Brows Have Main Character Energy— Here’s My Secret