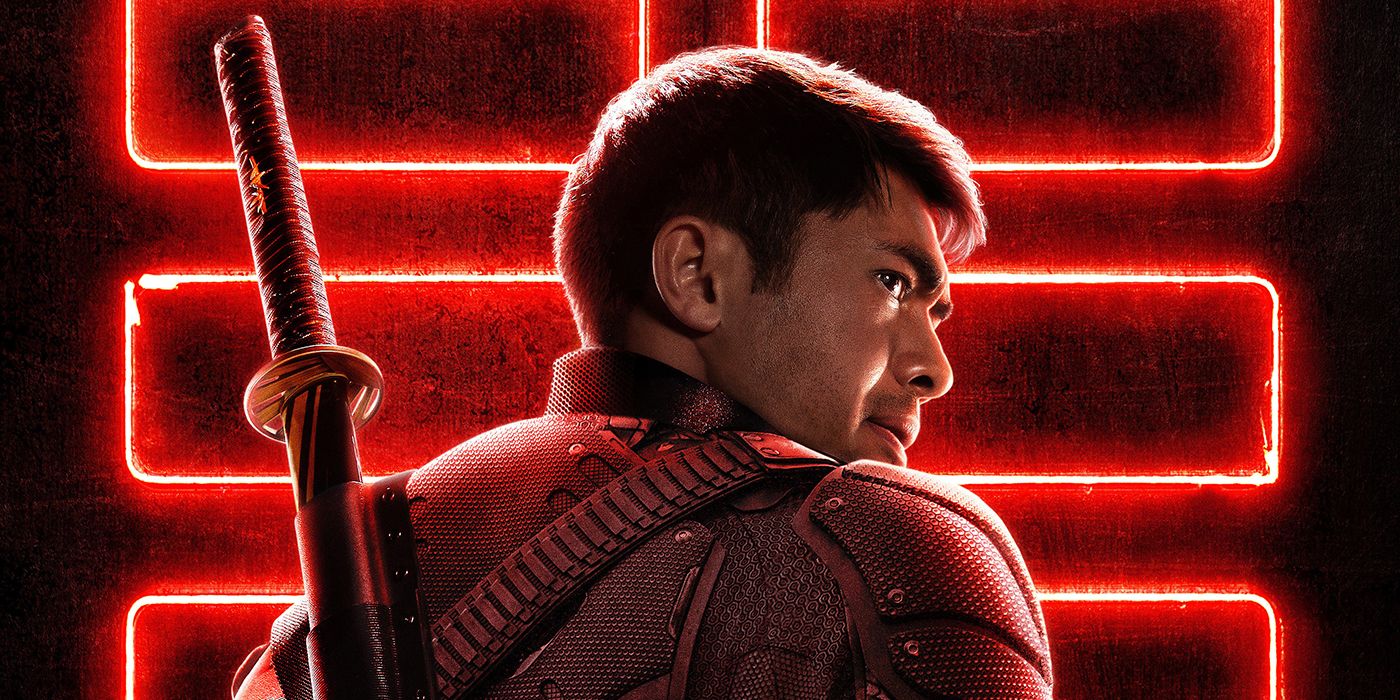 My first thought walking out of Snake Eyes was a shallow one, but in the interest of honesty I’ll lay it down first and explain later: “How dare a cast that hot be in a movie this bad.” The thing is, I don’t just mean “hot” in the sense of conventional attractiveness—although, make no mistake, this entire cast is deeply attractive—as much as I mean Snake Eyes is filled with a young class of dictionary-definition movie stars, presences you put on posters and billboards to sell tickets, the rare ones whose magnetism, charisma, and genuine talent make the price of admission worth it. That starts at the top with Henry Golding as the titular G.I. Joe, who shuffles aside a few pieces of gear to carry most of this movie on his back. If there’s a benefit to Snake Eyes existing, it’s to serve as proof that Golding is the caliber of leading man he’s been promising to become ever since wooing the world in Crazy Rich Asians. But Snake Eyes isn’t worthy of his or his co-stars’ charms. Director Robert Schwentke has churned out a franchise-starter origin story so by-the-books it has a plot revolving around, and please stop me if you’ve heard this before, a magical glowing orb. A spinoff centered around the G.I. Joe’s most kinetic martial artist should at least be carried by its action, but Snake Eyes‘ fight scenes are framed in the current Hollywood house style, i.e. impossible to see and low-key nauseating, all obscured shaky-cam close-ups and rapid-fire cuts, like a camera placed directly in a dryer’s tumble cycle. The talent involved suggests you’d want to actually show what is happening, but that’s just not how blockbuster action stories are told anymore.

RELATED: Samara Weaving on ‘Snake Eyes’, Damien Chazelle’s ‘Babylon,’ and Why She Loves Her Stunt Double

Plot-wise, they are told exactly like this, every time: Snake Eyes (Golding)—who, in a development that’s kind of hilarious and I kind of loved, never goes by anything other than “Snake Eyes” his entire life—is in the midst of a decades-long quest for vengeance against the man who killed his father. The journey leads him into the heart of the Yakuza, where he becomes indebted to an enigmatic crime boss called Kenta (Takehiro Hira). A mad dash from his gang life leads Snake Eyes to Japan, where an ancient ninja clan called the Arashikage offers him the opportunity to become something much, much more, and the man who brought him there, Tommy (Andrew Koji), a chance at the family he never had. But his ties to Kenta are still strong, and Snake Eyes finds himself caught in an age-old war with a mystical item, the Jewel of the Sun, at its center and the terrorist organization known as Cobra hovering menacingly at the edges.

In hindsight, an action-heavy martial arts melodrama built on the back of Japanese iconography was probably not the best vehicle for the director of R.I.P.D and Allegiant. All of the action in Snake Eyes, particularly an early truck escape that sees a windshield pin-cushioned with dozens of swords, give the appearance of excitement because there’s a lot happening all at once, all set to a pounding score from Martin Todsharow. But it’s all so muddled, no sense of space or choreography, the camera never lingering on more than two blows at a time before cutting to something else. Schwentke is obsessed with the fight scene set-up, ensuring characters look really, really cool posed against neon and rainstorms before the fight begins, an unintended reminder that most of these characters are based on action figures. (Now with 12 points of articulation!) But the director and his DP Bojan Bazelli race away from the action as soon as sword touches sword. It’s all cling-clang-cut away, cling-clang-cut away. It’s just random limbs and yelling.

It’s doubly a shame, considering Snake Eyes‘ cast proves it doesn’t have to be this way. When Iko Uwais finally appears in this film as the Arashikage’s “Hard Master”, I literally sat forward in my seat, a palpable sense of “ah shit here we go,” a reputation earned through modern action classics like The Raid films and Netflix’s The Night Comes For Us, and by proving with projects like Wu Assassins that a subpar story can be saved with impressive enough action. The film wastes Uwais. The film frequently cuts away from Uwais in its third-act set-pieces, which should be considered an actual crime. Andrew Koji has been a force for two seasons as the lead of Cinemax’s underappreciated martial arts drama Warrior; he is so good in Snake Eyes, playing a character bound in body and soul to his lineage and enraged when that lineage doesn’t show the same loyalty. He’s arguably the highlight of the film, my hope being this performance springboards him into stardom. My other hope is that future G.I. Joe movies frame him fighting for more than 3 seconds at a time. Samara Weaving has spent the last four years becoming genre’s go-to bloodsoaked superstar, the endlessly watchable scream queen who also whips ass across Ready or Not and Mayhem. She is, quite literally, air-dropped into Snake Eyes‘ third act for one of the most unearned Big Team-Up Moments in recent memory.

And, again, there is Golding, who makes a movie like this at least a little worth it. Golding is the emotional backbone of Snake Eyes, selling the inner conflict of the movie, which, for all its noise and blunder, is really a fight for the main character’s soul. Fortunate, then, that Golding is a soulful actor, a quietly expressive one; Snake Eye‘s emotional throughline works where its action doesn’t because it only has to play out across Golding’s face. It’s the type of performance that puts me, the reviewer, in the unenviable position of being honest about the film’s quality but still desperate to see more Golding in as big of projects as possible, not only a full-package leading man, but specifically as a Malaysian leading man in an industry that wouldn’t let Jet Li kiss Aaliyah at the turn of the century. But what better way to illustrate the dissonance between Hollywood’s most exciting up-and-comers and the franchise films they’re forced into than this: The main goal of Snake Eyes, the endgame, is to put Henry Golding under a mask.

‘Manifest’ May Be Saved by Netflix or NBC After All

Have ‘manifesters’ followed their callings and rescued their favorite show from its death date?