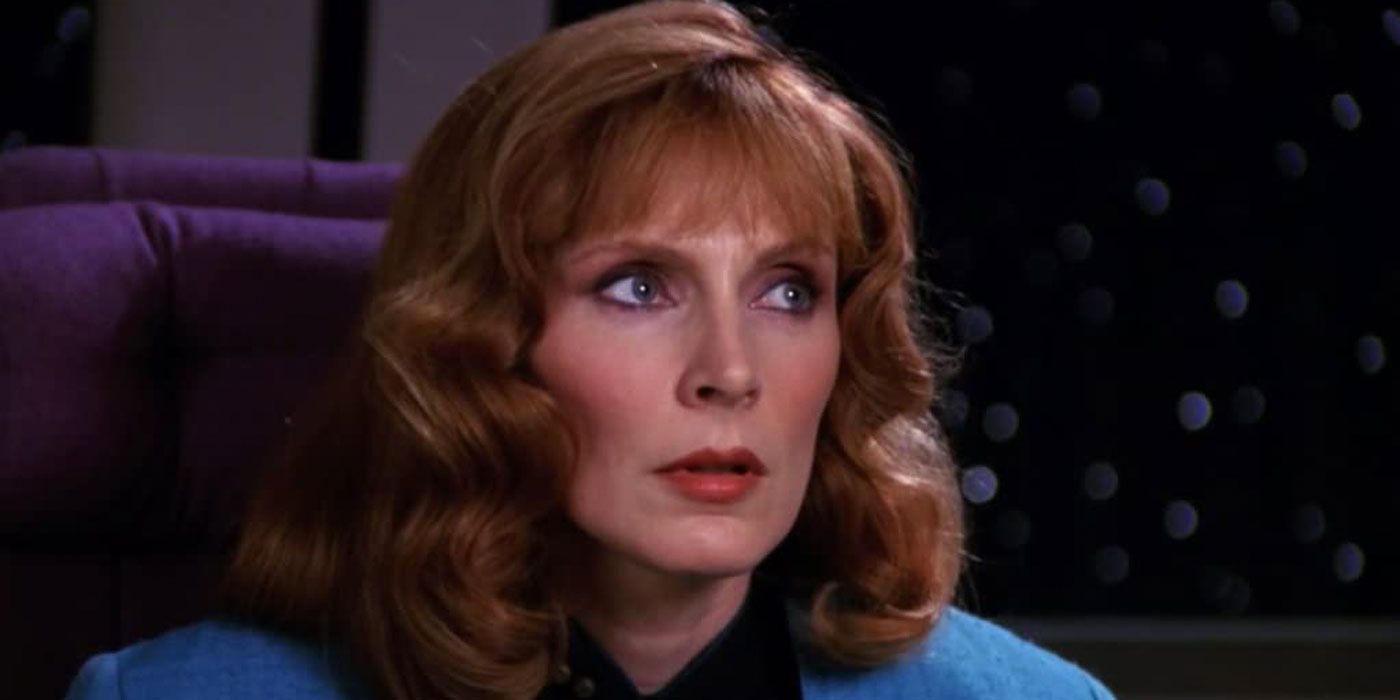 There are so many great, important, classic moments of Star Trek: The Next Generation, but the quote that means the most to me, the one that I think about so often it’s become a mantra, is not “Five card stud, nothing wild. And the sky’s the limit” or “Fear is the true enemy.” Instead, it’s a simple line from “Remember Me,” a fourth season emergency-of-the-week episode: “If there’s nothing wrong with me, maybe there’s something wrong with the universe.”

“Remember Me” premiered October 22, 1990, and for decades now, that line has been stuck in my head (thanks to the Twitter account No Context Trek for reminding me about it this week), for reasons that go well beyond its importance to the denouement of a Crusher-focused bottle episode — a classic example of a bottle episode, to the point where Crusher is literally trapped in a ship in a bottle (well, bubble universe).

Written by Lee Sheldon, “Remember Me” begins in a relatively chill manner, with Dr. Beverly Crusher (Gates McFadden) greeting her old mentor Dr. Dalen Quaice (Bill Erwin) as he arrives on the Enterprise for a trip to his home planet, following the death of his wife. However, when Dr. Quaice seemingly vanishing from his quarters, Crusher is immediately worried, especially when no one, including the computer, seems to have any memory of his existence. What seems like a strange anomoly quickly escalates into a tale of paranoia that causes Crusher to question her basic sanity, especially as more and more crew members start to disappear, with those who remain dwindling down until it’s just Crusher and Captain Picard (Patrick Stewart), traveling alone on a ship built for over a thousand occupants.

It’s basically “Gaslighting: The Episode,” but the entity doing the gaslighting is the very universe in which Crusher has been trapped, thanks to a glitch in a warp core experiment being run by her son Wesley (Wil Wheaton). Wesley and his mentor in reality-bending matters, The Traveller (Eric Menyuk) end up figuring out a way to bring Crusher back, but instrumental to her return is Crusher’s faith in her own sanity, as anchored by a truly solid performance by McFadden.

RELATED: ‘Star Trek: The Next Generation’s Gates McFadden Is Launching a Podcast That ‘Trek’ Fans Will Want to Hear

One of the episode’s best touches is that the first half takes place nearly entirely from Crusher’s point of view inside the bubble, keeping the viewer trapped with her in this strange reality where even beloved characters like Worf and Data disappear without a trace. And even when the episode does tip its hat to the fact that whatever’s happening to Crusher has an external cause, she’s still on her own, still relying on nothing more than her sense of self to keep her steady as she searches for a solution. The twist comes when she realizes that the bubble universe she’s stuck in is one of her own creation, as she was sucked into it while thinking about Dr. Quaice being alone, and the idea of losing the people in her own life.

Crusher eventually escapes, arriving back in Engineering (the location where the accident occurred) and gives Picard a big grateful hug, confirming that she’s back where she belongs, in a universe filled with the people she loves, a universe that makes sense. It’s not an easy path to her return, but she makes it out. Because she was right: there was nothing wrong with her. There was something wrong with the universe.

They’ve become like a mantra to me, these words, a declaration of self that in some ways is incredibly self-centered, one that could fuel all sorts of egomaniacal beliefs. But also, sometimes when the world feels like it’s going a bit mad, the most powerful approach you can take is the idea that the system around you is wrong, and that the problem lies not within you but without.

There’s something right and smart about always remembering to question reality. This is a relatively trivial example, but recently my computer has been wobbling on my desk, something I originally attributed to an issue with my elderly laptop’s case. This has been bothering me on an obsessive level, to the point of ordering a repair kit to replace the bottom screws and rubber feet, but even that didn’t fix the problem… Until I finally realized that the wood of my desk, which at this point is probably about 25 years old, has a slightly warped top. The problem wasn’t the computer, it was the surface on which it laid. I now put a matchbook beneath one corner of the laptop while sitting at my desk, and I am typing these words now with steady ease.

On a bigger level, “If there’s nothing wrong with me, maybe there’s something wrong with the universe,” might apply to, say, being in a bad relationship and not seeing the red flags that surround you, or living in a country led by a man who doesn’t believe in science, even at the height of a pandemic. It’s so easy to look inward when something about the world feels wrong, find ways to excuse it inside your own mind, because the alternative is to question the very nature of your own reality, and that requires a lot more work.

Sometimes, though, it’s worth it. Because you’re right.

Star Trek: The Next Generation is streaming on pretty much every streaming service except Quibi.

KEEP READING: How ‘Star Trek: The Next Generation’ Led ‘Lower Decks’ to Depict a Whole New Side of Starfleet

‘Cocaine Cowboys: The Kings of Miami’ Trailer Reveals a Wild Netflix Docuseries That Must Be Seen to Be Believed

Los Muchachos and Billy Corben are bringing the six-part saga to the streamer this summer.