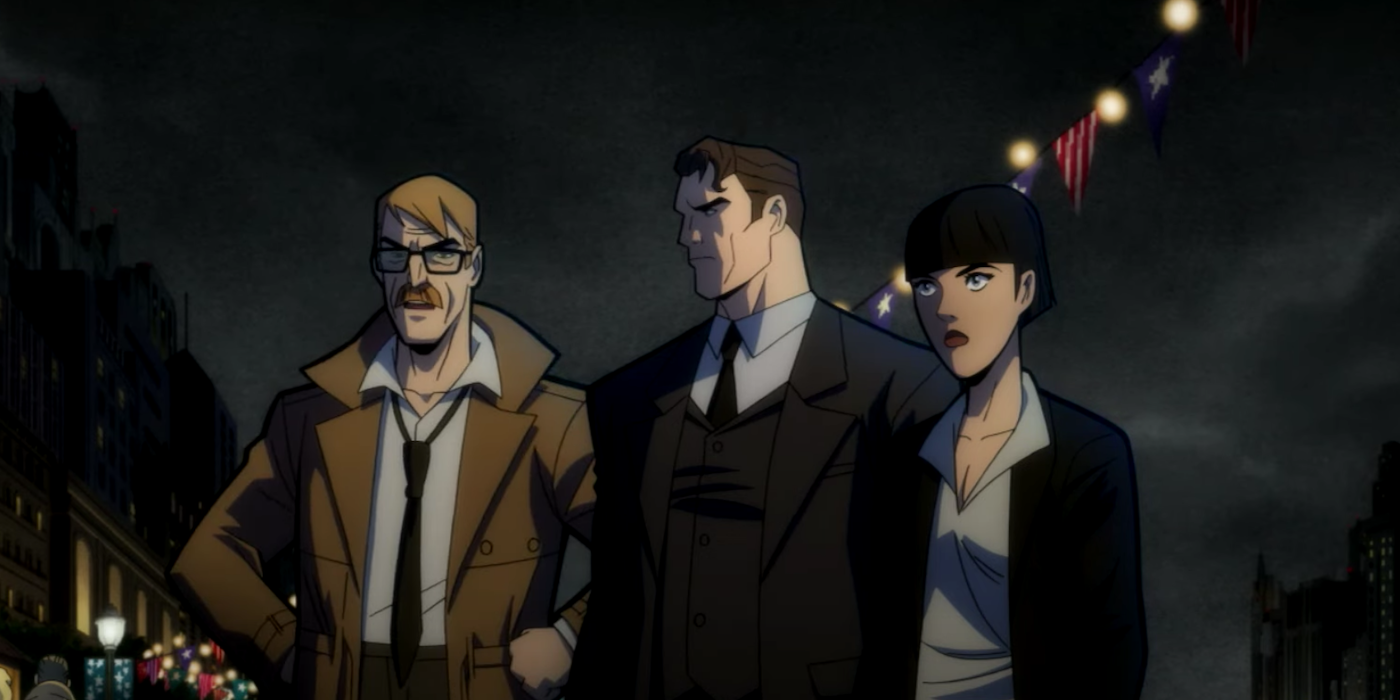 Fourth of July fireworks are lighting up the skies of Gotham in the new clip Warner Bros. released for Batman: The Long Halloween, Part Two.

In the clip, Harvey Dent laments the low turnout at the Fourth of July celebration, though given what happened on New Year’s Eve, no one should be too surprised that the good citizens of Gotham City stayed in for once. As the fireworks go off above them, Dent and Police Commissioner James Gordon discuss the mob war going on in the city, just as Carmine Falcone shows up to make things interesting. Tensions flare as Falcone pays special attention to Dent’s wife Gilda, just to get under the district attorney’s skin.

Gordon is, understandably, surprised to see Falcone out and about on a holiday. One of the main components of Batman: The Long Halloween is the serial killer targeting Falcone’s operations who happens to only strike on holidays. Perhaps Falcone should have been more concerned, as someone is watching him from the shadows. Is it the Holiday Killer? Or someone else the mobster has attracted the attention of.

Fans who have read the Batman: A Long Halloween comic series know that the skies of Gotham are being lit up by a lot more than just fireworks. The Scarecrow’s Fear Toxins are on their way among the rocket’s red glare. Does this tie into Falcone’s meeting with the Scarecrow that was teased in the last clip released for the film?

Batman: The Long Halloween was produced by Warner Bros. Animation and DC. Part Two will be distributed by Warner Bros. Home Entertainment on Digital starting July 27, and on Blu-ray beginning August 10. Check out the new clip below.

‘Demonic’ will be released in theaters and digitally on August 20.

Maggie Lovitt is a lover of all things Star Wars and pop culture. She is a Weekend TV/Movie News Writer at Collider. During the week she is the Managing Editor of Entertainment at Your Money Geek. In her free time, she is the host of Starbucks Lovers: A Taylor Swift Podcast, a co-host at The Outer Rim Beacon and Petticoats & Poppies: History Girls at the Movies, and the host of Let’s Talk About Star Wars on YouTube. When she’s not wreaking havoc on the internet, she can be found writing screenplays and novels. She is also an actor and member of the Screen Actors Guild.