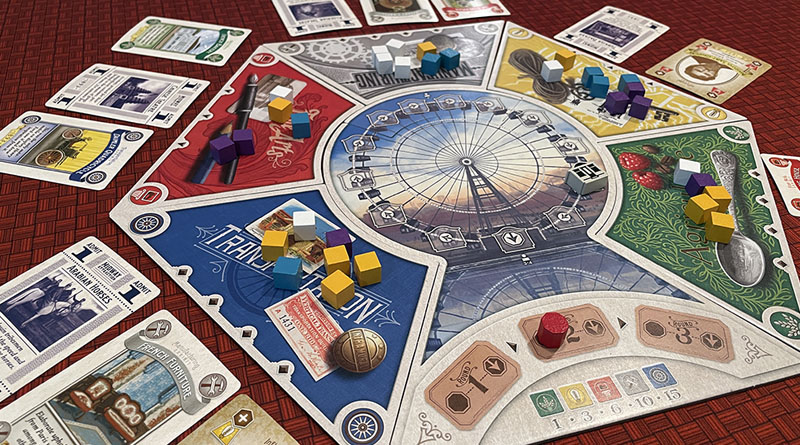 One of my favorite memories as a teenager was when our family went to Canada for Expo 86. It was a World’s Fair held in Vancouver, British Columbia, and I thought it was so cool.

The theme of Expo 86 was “Transportation and Communication: World in Motion – World in Touch” and it was a spectacle.

Perhaps it was because of my experience going to a World’s Fair that I was drawn to the board game World’s Fair 1893 when it was published a few years ago.

I first played the game at SaltCon a while back and enjoyed playing it. Then earlier this year, Renegade Game Studios announced a new version of the game. They sent us a copy and we’re excited to tell you all about it.

In the board game, players are organizers helping prepare the fair by sending out supporters to gain favor with influential people and secure grand exhibits. The objective is to earn the best reputation by the end of the game.

The central feature in the game is the grand Ferris wheel – which was first introduced at the World’s Fair 1893 in Chicago, Illinois. The top piece of the Ferris wheel is interchangeable depending on the number of players.

Each player places one of their 22 supporters (colored wooden cubes) on each area and gets a start bonus card depending on their position in turn order.

On a player’s turn, they go through 4 steps.

When the Ferris wheel car lands on the start space, it immediately stops and the round ends at the end of that player’s turn.

At the end of each of the 3 rounds, a scoring phase occurs:

After all areas have been scored, players retrieve some of their supporters. For every pair of supporters in an area, players must take back 1.

After scoring for rounds 1 and 2, play proceeds with the next player. At the end of round 3, players total up their points from midway coins, leader medals, and approved exhibits.

The player with the most points wins the game!

The recommended age on the box is 10+ and that’s a good assessment. Since there are a number of different factors to balance, players will need to think strategically to do well.

For starters, it’s an area-control game where players get points and benefits by having majorities in the different areas when scoring occurs at the end of each round. But there are also many other factors to consider as well.

The cards laid out in front of the different areas are also important to pay attention to. You may want to place your supporter in a certain area for majority, but if the cards next to that area won’t benefit you much, you may need to rethink your plan.

Since all players keep their cards face up in front of them, it’s easy to see where you stand. Having the most Midway tickets will grant great points, but having Influential People will also grant special abilities on your next turn – like moving supporters or adding more.

Speaking of which, the Influential People cards are a great boost to the game. If you’re stuck just placing 1 supporter each turn, you’ll have a hard time getting majorities. So getting extra placements from Influential People is a must to doing well.

Then there’s the factor of making sure you have the right colored cards when you do get a majority in an area so you can approve the exhibits and get exhibit tokens. And this is where big points are scored at the end of the game. At least it will be a good points boost if you’re getting sets of unique exhibits. Which means targeting just one area to get a majority in won’t benefit you in the long run.

And let’s also not forget that the luck of the card draw and where the cards get placed around the board each turn will also impact the options you’ll face.

Throw all these factors together and you’ve got a very balanced game to play with the family.

We also love the artwork and historical information on each card. Every exhibit, midway ticket, and influential people card provides information about that invention, element, or person.

There’s a great section in the rule book of the 2021 version denoting the historical situation at the World’s Fair 1893.

In 1893, it had been less than 30 years since the abolition of slavery in the United States. Despite the progress of the African Americans, they were not given the opportunity to share their own accomplishments at the World’s Fair.

The only black nation in attendance at the World’s Fair was Haiti. And Frederick Douglas was at the fair as the U.S. Minister to Haiti. He worked with newspaper editors in writing a publication to address Black concerns at being excluded from the fair. It exposed the unequal treatment of Blacks in America while celebrating their accomplishments.

How does World’s Fair 1893 score on our “Let’s Play Again” game meter?

World’s Fair 1893 is a solid family board game that scores well on our “let’s play again” game meter. The random set up of exhibit areas and continual flow of cards in front of the areas provide interesting choices throughout the game.

And the 3 rounds go by quickly enough that it’s easy to play a couple of games back to back.

We also really like the historical theme of the game and look forward to playing again and again.

If you’re looking to get a copy of World’s Fair 1893, we’d recommend getting the 2021 version now that it’s available.

We’d like to thank Renegade Game Studios for a review copy of World’s Fair 1893.

14 Tee-rific Gifts For the Golfer In Your Life — These Finds Are Truly Ace-Worthy
Free Guy: Watch Taika Waititi’s Improvisational Skills on Set
The First Switch OLED Comparison Video Has Surfaced
Sarain Fox on the Power of Storytelling and the Best iPhone Camera Yet
Our Favourite Comfortable Lingerie to Wear for Fall