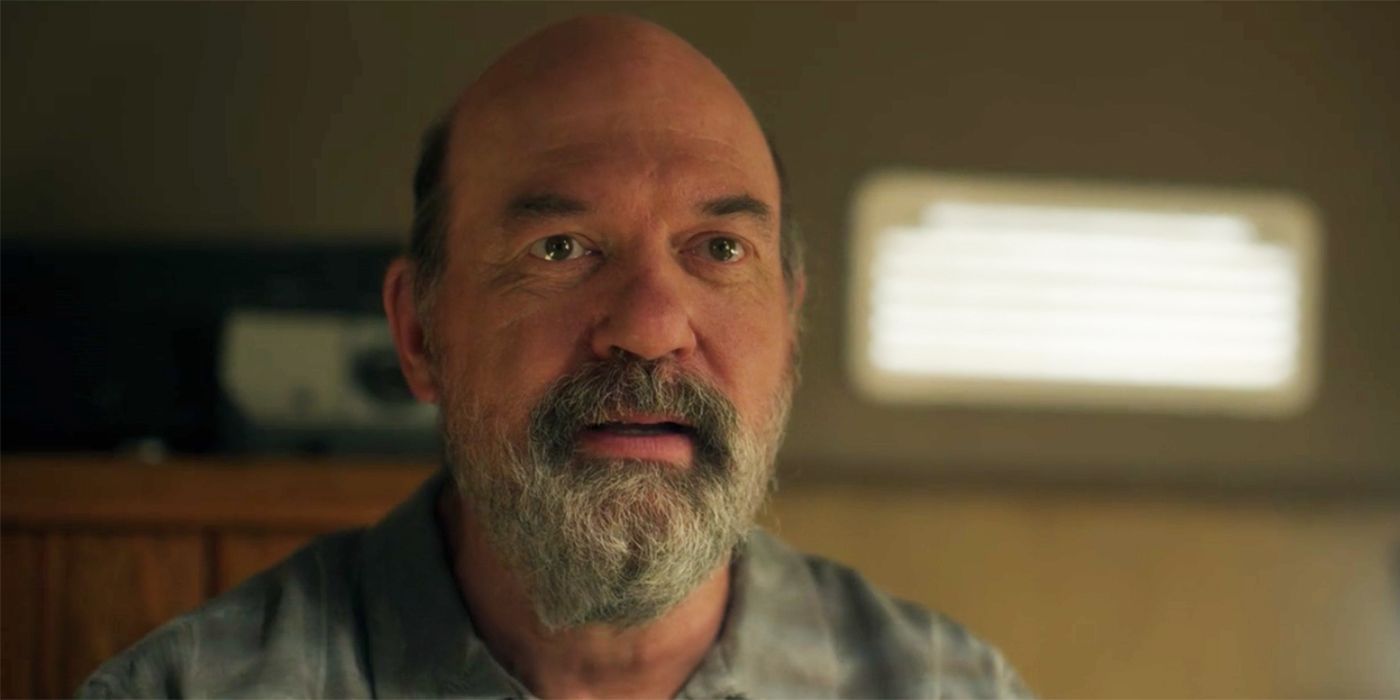 From executive produces Ryan Murphy and Brad Falchuk, the FX on Hulu streaming spin-off American Horror Stories is a weekly anthology series that features a different horror story with each episode and delves into various horror myths, legends and lore, with possible tie-ins and references to the AHS world. The third episode, “Drive In,” directed by Eduardo Sánchez and written by Manny Coto, follows a young couple (played by Rhenzy Feliz and Madison Bailey) who attend a screening of a forbidden film, only to learn that the horrific rumors about what happened to its previous viewers just might be true.

During this 1-on-1 phone interview with Collider, actor John Carroll Lynch talked about playing the film’s director, why he enjoys returning to the American Horror Story universe, being a fan of the anthology medium, and how he’s felt about the dark subject matter. He also talked about his experience making Zodiac with David Fincher, whether he’d like to direct again soon, and how he thinks the Gundersons from Fargo would have fared during COVID.

RELATED: Matt Bomer on Shooting With the Rubber (Wo)Man Suit and the Choice to Live in the Murder House

Collider: I appreciate you talking to me about your return to the American Horror Story universe.

JOHN CARROLL LYNCH: It’s always such a pleasure to be asked. The opportunities are really rich and it’s like being handed a box of truffles.

It seems like, if you’re going to play a horrendously awful person, you want to do it for Ryan Murphy because at least you’ll have fun.

LYNCH: I think that’s a good way to put it.

What was your reaction to learning about this spin-off? This is a spin-off of an anthology series, that’s essentially anthology episodes. Are you personally a fan of the anthology medium?

LYNCH: I was a big fan. I watched The Twilight Zone, which is the mothership of at least the anthology series. There was always Playhouse 90. A lot of television in the ‘50s was anthology. So, this was a form that I’ve always appreciated, particularly Night Gallery, which was a horror anthology. I love that show. It was fun to tune in to see what happened differently. For me, it was a great thing. When I first heard of the original series, it was fun for me to be able to explore these episode-long arcs, and then have the same company, or many of the same players, come back and play completely different characters in the next year. What an amazing opportunity for actors. And so, this is that, in the form of sketches and one-offs, just like The Twilight Zone. I think it’s fantastic.

Has there ever been anything that you’ve done, on either the main series or with this spin-off that you felt was too dark? Are you always able to make light of the things that are this kind of darker subject matter?

LYNCH: In fictional land, killing Dreama Walker with a broken oar was pretty tough. I’d worked with Dreama before and liked her very much, so the idea of having to take an oar and shove it down her throat was pretty awful. The one that’s been the hardest to get over was John Wayne Gacy because there were real people that died. He’s a chilling person to watch, and I watched his interviews near the end of his life, which were just incredible when it came to the banality of his evil.

How did you view this guy? What kind of a guy is Larry Bitterman to you?

LYNCH: I’ve worked with a lot of directors who are like Larry, which is exacting and perfectionist and absolutely certain they know what’s right for their picture, and he’s not wrong about that. The only problem with Larry Bitterman is, is that he has no regard for what the audience is going to experience, except he wants them to experience the horror movie. He describes it, which I think is hilarious, as an “Incredible artistic success. It’s amazing. It’s an amazing artistic success.” He’s just insane. His narcissism was fun to play. He was just really fun to pay.

What do you think it is that drives somebody to the point where they consider 100% carnage and death to be success?

Your character specifically points out the subliminal sounds and pictures that were used in The Exorcist. Was that something that you had been aware of, before this?

LYNCH: I was aware that it had happened. I was aware that [William] Friedkin had used those techniques, like that movie needed it. I had read about it, in terms of film, with how you can elicit emotional responses by cutting things in or with sound, which Bitterman talks a lot about. We’re in a world in which our emotions are being attacked every day, in a wide variety of ways. People are trying to manipulate us all the time and it’s very difficult to not be manipulated. It’s very hard. Sometimes you have to ask yourself the question, do I actually feel this way, or am I being manipulated into feeling this way? Social media is a perfect example. Twitter has introduced, just for testing, a dislike button because we need a whole bunch of other reasons why we wanna be on Twitter. I’m on Twitter, and not unlike Rabbit Rabbit, Twitter is intended to piss you off. That’s its primary gift. Rabbit Rabbit is just an extension of that.

At the end of the episode, your character says that what’s happened is only act one and that this is not the ending of the story. By selling his film to Netflix for streaming, what do you think he was hoping would happen, since he won’t get to see the fruits of his labor?

He probably should have thought about the fact that, if they’re dead, they can’t tell their friends to go see the movie.

You also played a character in Zodiac that easily could have been someone you could have played in the American Horror Story universe. What do you remember about working on that movie and working with a director like David Fincher?

LYNCH: David is a director who is exacting. The movie itself, Zodiac, is a meditation on obsession because the Zodiac is obsessed and his obsession metastasises to all of the other main characters in the story. Like Rabbit Rabbit, it is a meditation on the viral nature of violence. He can direct every aspect of a film with such accuracy and such intention. It’s really extraordinary to work with someone of such mastery. I really appreciated doing it. I appreciate his work, always. As far as the character is concerned, it’s based on a real person. Arthur Leigh Allen was a real person, and he was one of the main suspects for the person who might be the Zodiac killer. What’s so groundbreaking about the film is what’s true in real life, which is that no one ever knew. He was never caught.

You directed Lucky a few years ago now. Are you hoping to or looking to direct again? Have you ever thought about directing an American Horror Story episode, or directing something in the world of Ryan Murphy?

LYNCH: I’ve talked to Ryan about that. I’m also in the process of negotiating some other things to direct. The difference between directing a television show and directing a feature is, unless it’s a feature that’s in a franchise, you’re a step parent. You have a lot of the responsibility, but none of the authority. I’m actually excited to explore that because it’ll give me an opportunity for prep time, for production time, and for post time, so I can learn more about all of the mechanics of the process in circumstances where they’re really fully supportive. I love Lucky. I’m extraordinarily grateful and proud of the film. And I have other original features that I’m working on producing. Producing a film, for me in this circumstance, is like going to somebody and saying, “I’d like to build a house on your land. I’d like you to pay for it. And I don’t wanna take any notes from you on what house it should be.” It’s a really difficult arrangement, in my circumstance, to get that going. That being said, I’m intent that 2022 not pass without me directing at least one feature.

It seems like it would be fun to direct something in the American Horror Story universe because you could jump into that world for an episode, and then jump back out.

How did you find the experience of working with Eduardo Sánchez? As someone who is very familiar with working in this type of genre, what do you think he brought to this world?

LYNCH: I enjoyed working with Eduardo very much. It was a short project, obviously. It was just a few days. It was wonderful to see how he and the cinematographer, Cybel Martin, who I would love to work with again, worked together. I really enjoyed the process, watching them create that kind of world in such a short period of time. The American Horror Story flagship has created the Hotel Cortez, they created the Freak Show, they created Roanoke, and they create these huge worlds. With American Horror Stories, they have to do the same thing, only in eight days, for each one. That’s the ambition of the show and the bravado of it, and I really appreciate that.

Did you also have fun getting to work with your young co-stars, Rhenzy Feliz and Madison Bailey?

LYNCH: It was great. It was great to meet them and work with them. Also, they were a terrible audience. I was really pitching Rabbit Rabbit and it was like a really bad pitch meeting. They were not buying it. I’ve gotta say, they were wrong. It’s a masterpiece.

As a fun last question, how do you think Norm and Marge Gunderson, the characters that you and Frances McDormand played in Fargo, spent quarantine? How do you think they’d be doing right now?

LYNCH: Oh, they would have had a perfectly fine time. Ice fishing is easily quarantine material. If you’re in your own ice hut, you’re absolutely safe. And they enjoy each other’s company, so fully and completely. He’s a self-starter. I don’t know if you know much about wildlife art, but it’s all very solitary. And she’s a duck that can swim in all waters. They would have been just fine.

American Horror Stories is available to stream at FX on Hulu.

The horror maestro’s mysterious next film is coming to theaters in July 2022.

Christina Radish is a Senior Reporter at Collider. Having worked at Collider for over a decade (since 2009), her primary focus is on film and television interviews with talent both in front of and behind the camera. She is a theme park fanatic, which has lead to covering various land and ride openings, and a huge music fan, for which she judges life by the time before Pearl Jam and the time after. She is also a member of the Critics Choice Association and the Television Critics Association.