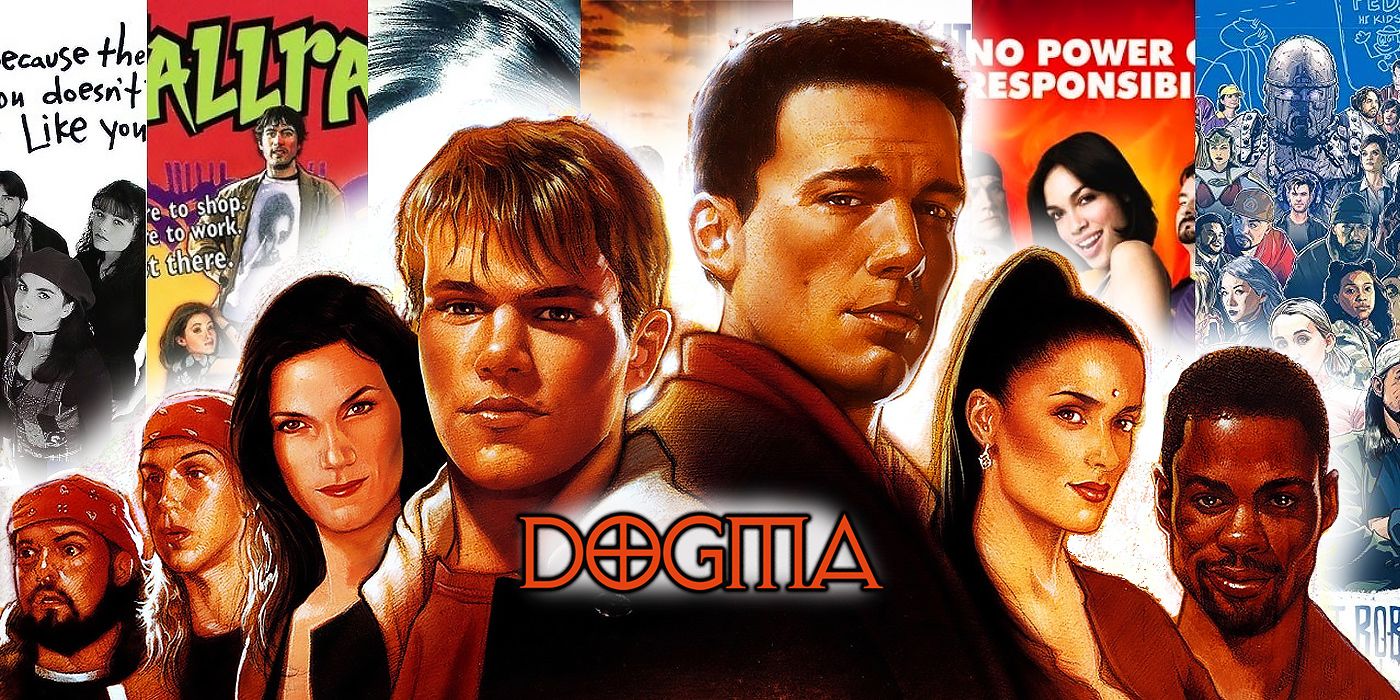 The Marvel Cinematic Universe may have popularized the idea of connected films that weren’t direct sequels to each other, but Kevin Smith, an avowed comic fan who knew all about interconnected stories, did it with his own movies back in the 90s and 2000s. Hardworking Quick Stop Groceries salesman Dante (Brian O’Halloran), his loud-mouthed best friend Randal (Jeff Anderson), and the stoners Jay (Jason Mewes) and Silent Bob (Smith) that first appeared in Smith’s debut film Clerks had recurring roles in Smith’s subsequent series of films. The minimalist direction and dialogue heavy screenplays, often featuring heavy pop culture references, crass humor, and frank strains within relationships, are consistent among View Askewniverse films, but the stories themselves are mostly standalone.

The novelty of Clerks’s low budget appeal was incredibly influential on 90s indie cinema, but not all of the View Askewniverse have aged gracefully. The of-the-moment pop culture references have grown dated, and a film like Chasing Amy that seemed like a breakthrough in its depiction of LGBT relationships in 1997 plays as a clumsy outreach effort in 2021. These films are products of their time, but the 1999 religious comedy Dogma stands out as the most empathetic, original, and timeless of Smith’s career.

The film follows fallen angels Bartleby (Ben Affleck) and Loki (Matt Damon), whose aptitude for pranks forced them to live out eternity on Earth. The pair manage to amuse themselves by speculating on the potential sins of various pedestrians and confronting the most egregious cases, but humanity’s unremarkable achievements now bore them. They plot a return to Heaven, as a loophole within the dogma of Christianity would allow them re-entry thanks to an overzealous cardinal (George Carlin) offering absolution for anyone that simply crosses the threshold of his church. However, if the Word of God can be circumvented, it will mean the end of everything.

RELATED: Kevin Smith on ‘Masters of the Universe: Revelation,’ Treating He-Man Like Shakespeare, and What Made Him Cry

The premise itself may ring inflammatory, and in 1999 when Family Guy and South Park were in early stages, its irreverent approach to sensitive topics was particularly novel. Despite the controversy generated, Dogma is genuinely empathetic towards all of the viewpoints it depicts. The Catholic Church’s commercialization, as evidenced by the adoption of a more appealing “Buddy Christ” crucifix symbol, are satirical but not mean-spirited, and the film’s protagonist Bethany (Linda Fiorentino) undergoes an emotional crisis of faith.

Bethany’s life was spiraling out of control before a visit from Metatron (the booming voice of God is none other than Alan Rickman), who explains she’s destined to save humanity from being eradicated. An abortion clinic worker who nononethless attends worship every week, Bethany isn’t just at risking her faith, but her own self-doubt. She feels she’s never successfully changed peoples’ lives for the better, so the expectations of saving the human race only heightens her anxiety. View Askewniverse films like Mallrats or Clerks attempted to find banality with realistic characters with little motivations, but Dogma showed Smith could successfully craft a character whose hero’s journey mirrored the geeky heroes he frequently references.

Smith’s affinity for hard genre storytelling has always been evident, and in the post-View Askewniverse period of his career he would venture into horror-comedy with Red State, Tusk, and Yoga Hosers. While interesting experiments, these films lack the relatable humor that made his early films so influential. Dogma doesn’t skimp on hard fantasy; it dedicates a fair amount of time explaining its reimagining of Biblical figures, but there’s still room for fart jokes and the antics of Jay and Silent Bob. It opened up the View Askewniverse by radically changing genres, but it didn’t lose the stylism that made it successful in the first place.

The View Askewniverse has run for a quarter-century now thanks to Jay and Silent Bob Reboot in 2019, but its audience growth may be dwindling with the reliance on callbacks. Even Clerks II and Jay and Silent Bob Strike Back require a familiarity with the in-jokes that may be a barrier for casual viewers, but Dogma is fairly accessible. The throwbacks are fun if you’ve seen Jay and Silent Bob before or know what a Mooby Burger is, but they don’t impede the viewing experience if you’re just looking for a surrealist comedy.

Outside of occasional “gay panic” jokes that haven’t aged gracefully, Dogma’s provocative humor has largely held up. The satire of the Catholic Church’s commercialization and unaccountability are still fairly stinging, and the introduction of Rufus (Chris Rock) as the forgotten “black apostle” is surprisingly thoughtful. Rock’s cheeky explanation of how he was written out of history isn’t meant to be insensitive; that’s simply the banal way Smith writes characters.

Dogma’s larger accessibility has been cut off not by any surrounding controversy, but because the film simply isn’t available to stream. As Smith himself explained back in 2019, the rights belong to the Weinsteins, who bought the rights for home video release. Without any new physical media releases, copies of the film have been sold out, and you can’t find the film on any streaming services. Perhaps Dogma would gain larger reppareciation if it had widespread availability and wasn’t limited to those with second hand copies.

Dogma was the biggest swing of Smith’s career, and as it bridged the crossovers that make the View Askewniverse unique, but developed a unique fantasy mythology. The fluid blend of satirical humor and thoughtful character arcs are timeless, but the niche references to the 90s make it a time capsule. As production ramps up for Clerks III, it’s worth reflecting on Dogma as the film that showed the View Askewniverse at its strongest.

‘House of the Dragon’: Olivia Cooke Describes Her “Complex” Queen in ‘Game of Thrones’ Prequel

“People are gonna want to see the worst in her.”