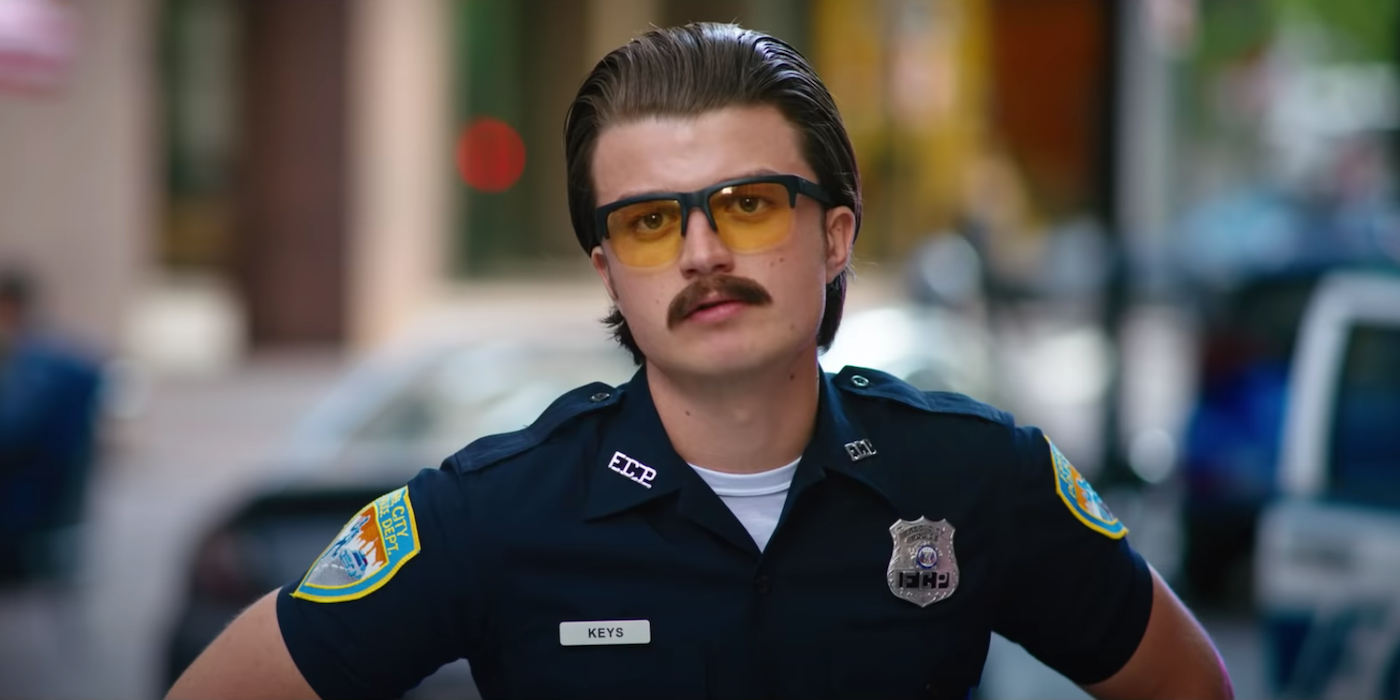 20th Century Studios has released a new clip for their forthcoming film Free Guy, which gives a closer look at Joe Keery and Utkarsh Ambudkar‘s characters of Keys and Mouser, respectively. The film, which is led by Ryan Reynolds and also stars Jodie Comer and Taika Waititi, will be released on August 13.

The brief clip gives a sense solid sense of Free Guy‘s tone, with Keys and Mouser dishing quips back and forth in an effort to bring in the individual behind Reynolds’ Guy. It also seems clear that this is pretty early on in Guy’s (also known as Neutrogena or Captain Khakis) acquisition of his glasses, which make him come alive in the game, also evidenced by the trailers. Mouser and Keys are trying to gain Guy’s ‘skin,’ which understandably leaves Guy pretty confused about the entire situation.

RELATED: ‘Free Guy’: Ryan Reynolds and Jodie Comer Explain Why Their New Movie Is “A Fastball of Joy”

As has been well-documented at this point, Free Guy, which is directed by Shawn Levy, was originally set to release last year for the coveted Fourth of July weekend. The COVID-19 pandemic obviously threw a wrench into that date, but also unleashed its wrath on Levy and 20th Century Studios two other times, with dates set for December 2020 and May 2021 at different points. Now, with a release date of August 13 that has stuck for several months, it seems like Free Guy will finally be hitting theaters soon.

Those who have been lucky enough to already see the action-comedy have praised its heart and performances, with Collider’s own Steve Weintraub calling it immersive and potentially “the best video game movie ever made.” Free Guy is written by Matt Lieberman and Zak Penn, with Lieberman also developing the story. Sarah Schechter, Greg Berlanti, and Adam Kolbrenner are producers in addition to Levy and Reynolds.

Free Guy comes to theaters on August 13. Check out the new clip below.

Bob Odenkirk Is “Going to Be Okay” According to Son, Nate

It’s great to hear good news about the beloved Odenkirk.

John Lutz is a Weekend Film/Television News Writer for Collider. He joined the team in the summer of 2021, but has been an avid fan and follower of the site for years. With a Bachelor’s Degree in journalism, John has always enjoyed writing, particularly for film and television, going so far as to minor in film studies. He manages all of the written content for the independent podcast Post-Credit Brews, in addition to serving as a co-host. John is an avid fan of the MCU, action, and sci-fi films, but also enjoys a good thriller or work from a true cinematic auteur. His passion also extends into television, and he will riot if Bob Odenkirk doesn’t win an Emmy Award by the end of Better Call Saul’s run.