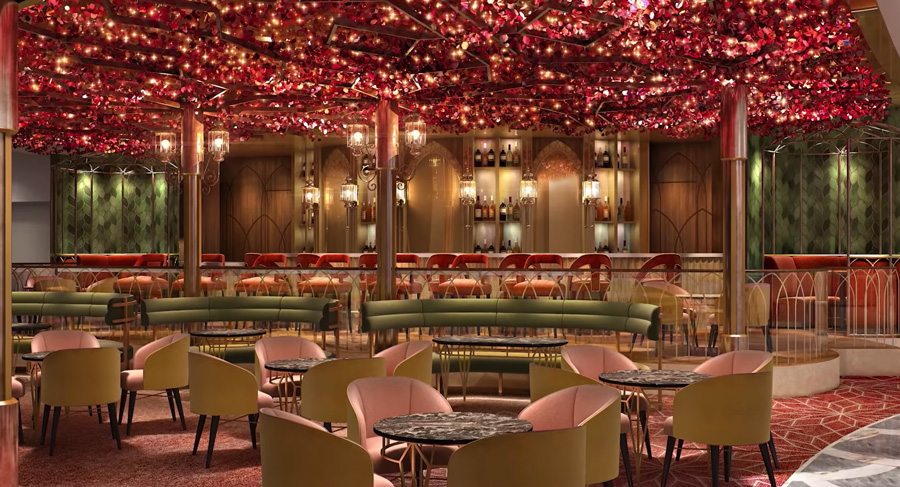 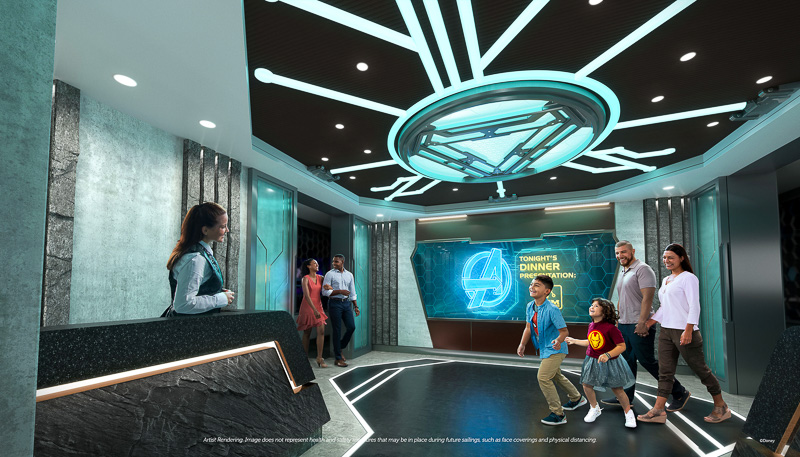 Disney Cruise Line has revealed restaurant and dining details for the upcoming Disney Wish, which debuts in Summer 2022. This includes the immersive “Avengers: Quantum Encounter” family dining experience at Worlds of Marvel restaurant, Marceline Market, Mickey & Friends Festival of Foods, a Princess and the Frog-themed lounge, and more.

In case you missed it, DCL held its Disney Wish Grand Reveal earlier this summer. That was a massive “detail dump,” that we probably should’ve broken down into several posts because there was such a deluge of info about the upcoming Disney Wish ship.

There has been additional info released since then, mostly about specialty suites and staterooms that are very much niche topics given their limited inventory and price points. It’s actually a bit unfortunate we haven’t revisited the Disney Wish in the last couple of months, and wanted to remedy that today with new details about the dining experiences…

The reason our lack of follow-up is “unfortunate” is because the Wish is one of Disney’s most exciting projects on the horizon. With Disneyland’s and Walt Disney World’s biggest projects wrapping up and nothing announced for 2022, there isn’t anything “big” slated for next year until Tron Lightcycle Run and/or Guardians of the Galaxy: Cosmic Rewind receive opening dates.

Even setting that aside, the Disney Wish looks amazing. It’s as if Imagineering took a huge leap forward, iterating on past designs to make technical, functional, and storytelling improvements in the process. It’s still early, but the Disney Wish looks significantly better than its predecessors, which is really saying something since those ships are exceptional. If you’ve never done Disney Cruise Line because you’re a “theme parks person” (that was me once!) you should read more about the Disney Wish and consider changing your position. This ship looks incredible, and in several ways, like a floating theme park at sea.

Anyway, let’s turn to what’s been announced in terms of dining on the Disney Wish, starting with a video previewing adult experiences aboard the Disney Wish…

Like every Disney Cruise Line vessel, the Disney Wish will offer a collection of bars and lounges reserved exclusively for adults each evening.

These venues will be spread out among the ship’s other core gathering places for a more flexible, free-flow experience. Also new is the storytelling in these spaces, providing ways for adults to experience Disney stories in sophisticated ways. 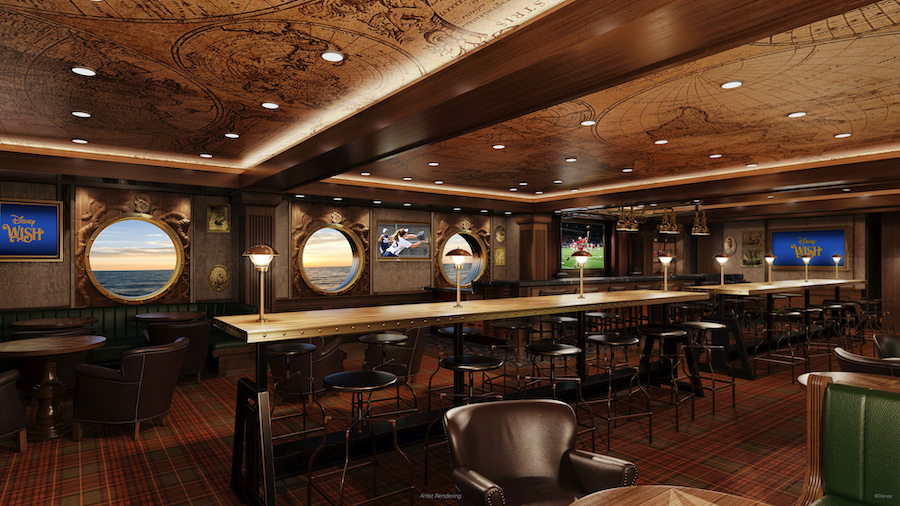 Keg & Compass – A pub that is perfect for watching live sports or news while enjoying custom craft beers available exclusively aboard the Disney Wish. Keg & Compass celebrates the adventure and romance of the sea, designed in the architectural style of a late 1800s Norwegian sailor’s map room. Drawing inspiration from the rich folklore of Norse seafaring, period-style oil paintings will depict tales of the deep and intricate carvings of tentacles, barnacles, compasses, and more will accentuate porthole frames.

Spanning the entire ceiling will be a grand map in old maritime style that features references to ocean lore and pays homage to Disney characters and stories related to the sea. In addition to such characters as Ursula and Moana, the map will call out important locales related to Disney. 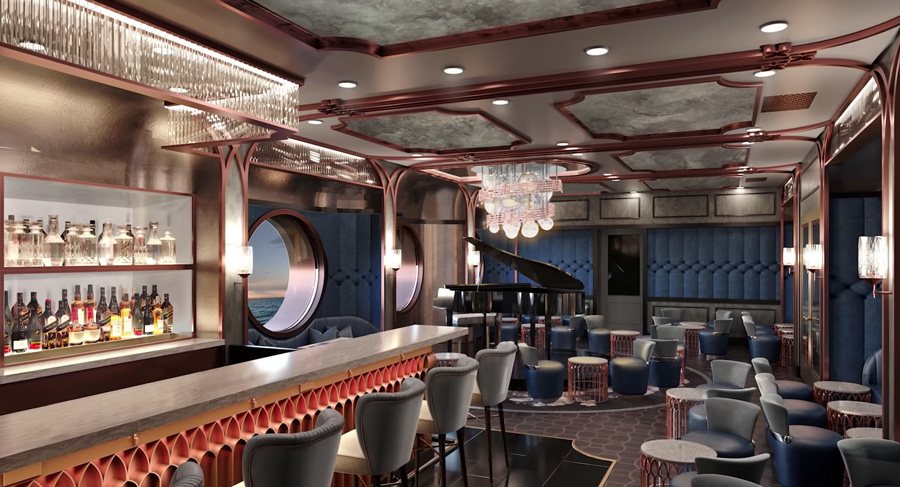 Nightingale’s – A refined piano bar inspired by Cinderella’s lyrical rendition of “Sing Sweet Nightingale” in the 1950 film, offering an extensive menu of fine wines, bubblies and hand-crafted cocktails. Nightingale’s lounge will be a thematic extension of the fairytale-inspired Grand Hall from which it stems, with large doors that allow the music to spill into the atrium.

Classically modern with a soft metallic palette, the predominant design feature of Nightingale’s will be a glittering chandelier perched above the piano, with swirling pearlescent bubbles and music notes crafted out of rose gold.

The Bayou – Guests looking for New Orleans-inspired good time can go down to The Bayou, an informal lounge themed to The Princess and the Frog. This centrally located venue will offer creative cocktails, specialty coffees, and signature beignets in a lively, social atmosphere with live entertainment and musical performances.

With magnolia blossoms, lily pads, and a canopy of twinkling fireflies overhead, the Bayou will evoke the magical marsh where Tiana and Naveen take refuge in the film. A bronze statue of each character will be prominently displayed, and two gazebos inspired by the city’s iconic wrought iron metalwork structures will provide intimate seating for small groups on either side of the bar. 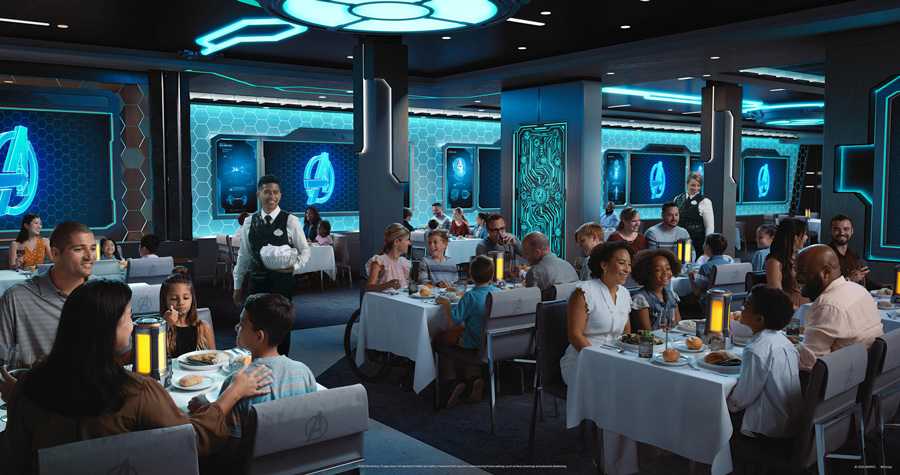 ‘Avengers: Quantum Encounter’ at Worlds of Marvel – Worlds of Marvel is the first-ever Marvel cinematic dining adventure, where guests will play an interactive role in an action-packed Avengers mission that unfolds around them, complete with a worldly menu inspired by the Marvel Cinematic Universe.

“Avengers: Quantum Encounter” will follow Ant-Man and The Wasp as they embark on their first public speaking engagement on behalf of the Avengers. They are hosting a special presentation of the most powerful Super Hero technologies, such as Captain America’s shield, Iron Man’s arc reactor, and Ant-Man’s Pym Particles. This will give guests an up-close look at holographic models, field reports, and iconic scenes from Marvel movies displayed on the screens surrounding the room.

The highlight of this special event is a hands-on demonstration of the latest and greatest Pym Tech, the Quantum Core, which uses unstable, cutting-edge technology to shrink and grow targets. Of course, something will go hilariously wrong, with Ant-Man-style hijinks ensuing. An unexpected villain will also show up with an army in tow, attempting to steal the quantum technology. Ant-Man and The Wasp will need all the help they can get to save the day, calling on Captain America, Captain Marvel, and the diners of the Disney Wish for back-up. 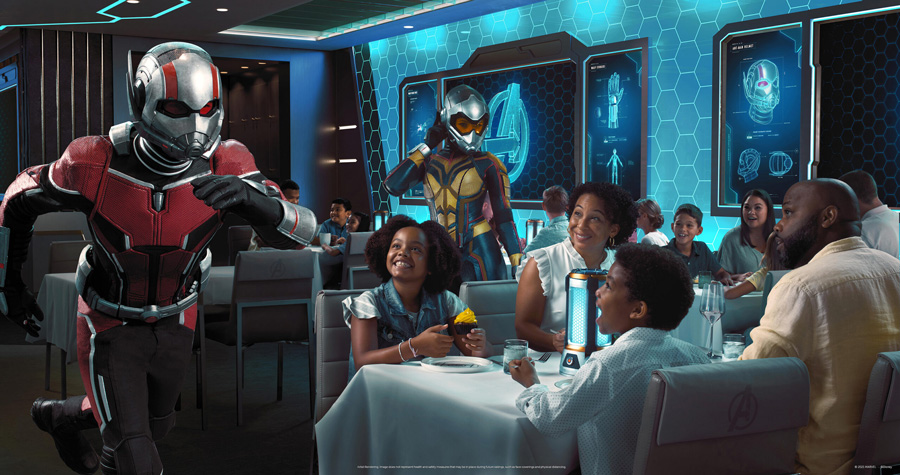 Every table at Worlds of Marvel will feature an interactive Quantum Core, which is a new device that can cause objects to shrink and grow remotely. Guests will assist Ant-Man and The Wasp as they attempt some small-scale trials, perhaps shrinking oversized luggage for easy stateroom storage.

When enough of the Quantum Cores are activated at the same time, the entire venue will become supercharged as energy pulses through the power channels in the walls and ceiling. Outfitted with Pym Tech and decked out in signature Stark-itecture style, the design of Worlds of Marvel will offer surprises in all shapes and sizes, from a distinctly Marvel hexagonal motif to Easter eggs and hidden details.

Worlds of Marvel will take families on a flavorful tour of the real and fictional settings of the Marvel Cinematic Universe, with dishes inspired by locales like African Wakanda, Eastern European Sokovia, and the Avengers’ home base of New York City. Guests can expect to find a diverse array of globally influenced items and fun nods to the worlds and characters from Marvel Studios films. 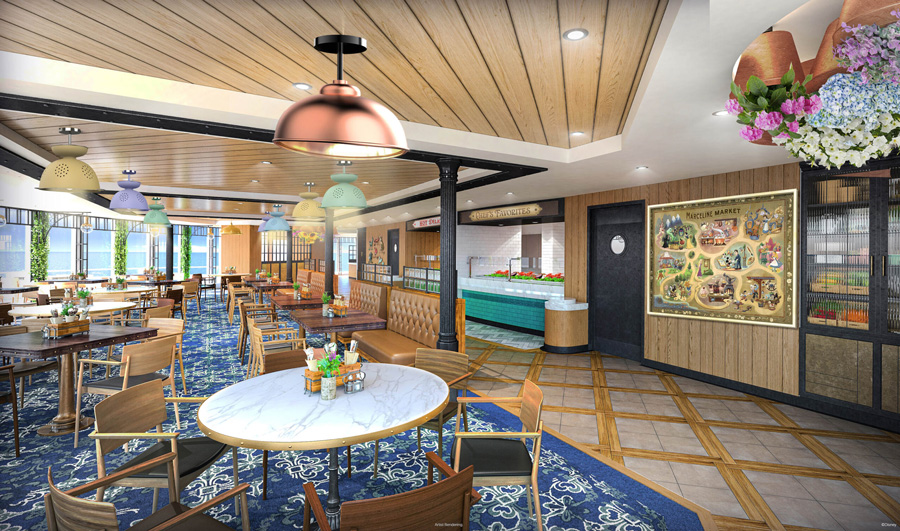 Marceline Market – Named for Walt Disney’s early childhood hometown in Missouri, Marceline Market is the Disney Wish’s main food hall. Inspired by popular marketplaces, Marceline Market will feature a changing menu of specialized offerings in a free flow setting with both indoor and outdoor seating and ocean views all around.

Featuring 10 food stalls and a café-style beverage bar in the center, Marceline Market will be styled as an old industrial loft converted into a bustling marketplace. At this food hall, the local proprietors are Disney characters themselves, as each station is themed to beloved animated films such as Tangled, Ratatouille, Alice in Wonderland, Zootopia, and more. 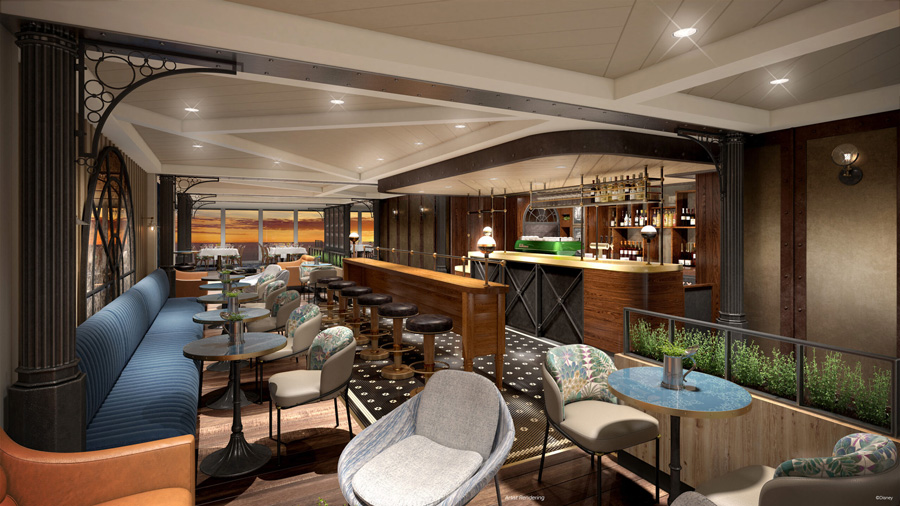 Mickey and Friends Festival of Foods – Located in the middle of the fun on the upper decks, Mickey and Friends Festival of Foods will be the venue for grabbing a quick bite for lunch, dinner or anytime in between. Fan-favorite treats will include Disney Cruise Line’s signature soft-serve ice cream. The Disney Wish will feature the fleet’s first dedicated quick-service venues for barbeque and Mexican-inspired fare. 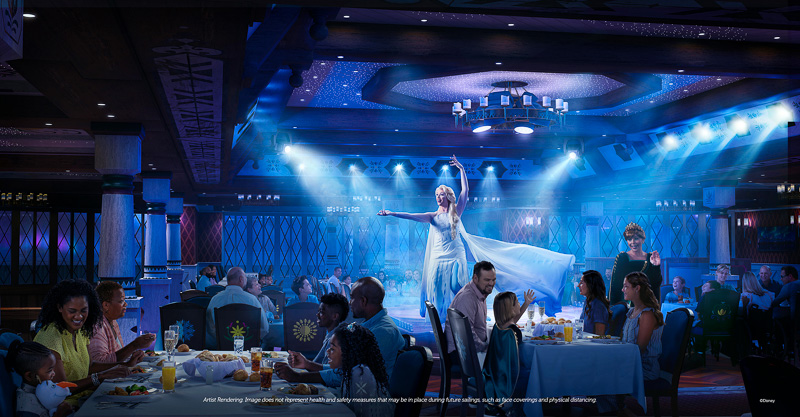 1923 – An elegant celebration of The Walt Disney Company’s legacy, paying homage to the golden age of animation and offering a tasteful tribute to its Californian heritage. 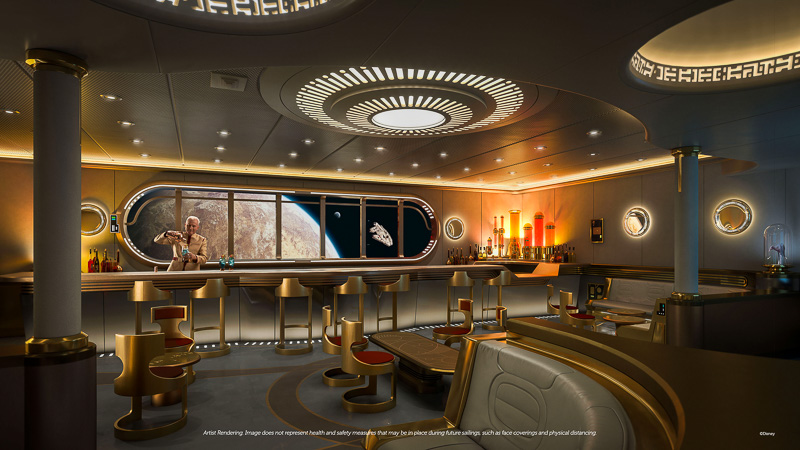 Star Wars: Hyperspace Lounge – For the first time on a Disney ship, guests will embark on a space-jumping tour of the Star Wars galaxy at Star Wars: Hyperspace Lounge, a high-end bar styled as a luxurious yacht-class spaceship. This richly themed, immersive experience will be reserved for adults every evening, offering interactive tasting experiences and signature beverages inspired by the films.

Palo Steakhouse – An evolution of the Palo restaurant that Disney cruisers know and love, now combining the relaxed sophistication of authentic Italian dining with the classic refinement of a modern steakhouse in a genteel setting inspired by Cogsworth, the tale’s majordomo-turned-enchanted-clock. 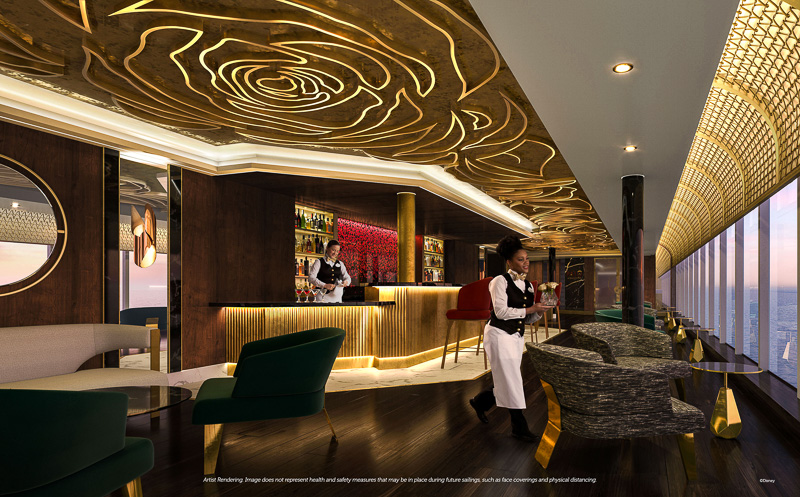 The Rose – A chic lounge at the entrance of Palo Steakhouse and Enchanté, inspired by the fateful flower at the heart of the story. The Rose is an idyllic setting for a pre-dinner aperitif or after-dinner cocktail.

Enchanté – The most luxurious dining experience on board, featuring a gourmet menu crafted by three-Michelin-starred Chef Arnaud Lallement. This romantic and intimate venue will evoke the dazzling spirit of the film’s candelabra maitre d’, Lumiere.

Quiet Cove Pool District – Guests aged 18 and older will find a secluded adults-only district dedicated to lounging, sipping and soaking. Set away from the bustle of family activities, this peaceful refuge will offer panoramic views of the ocean from a luxurious infinity pool. Other amenities include a whirlpool spa, an open-air bar and a poolside cafe.

Planning to set sail aboard one of the DCL ships? Read our comprehensive Disney Cruise Line Guide to prepare for your voyage, plus plan entertainment, activities & excursions, and learn what to expect from your Disney cruise! For personalized planning & recommendations, click here to get a cruise quote from a no-fee Authorized Disney Vacation Planner. They can find you all of the current discounts, and help you plan the details of your cruise!

Does this have you more excited for the Disney Wish? Looking forward to Arendelle: A Frozen Dining Adventure or ‘Avengers: Quantum Encounter’ at Worlds of Marvel? What about the other rotational dining options, bars & lounges for adults, or fast-casual restaurant lineup? Do you plan on booking a cruise aboard this ship, or are you awaiting more details, reviews, or anything else? Do you agree or disagree with our advice and assessment? Any questions? Hearing feedback about your experiences is both interesting to us and helpful to other readers, so please share your thoughts below in the comments!

How to Watch Rihanna’s Savage x Fenty Show Online
What Is “Fendace” and Why Is It Taking Over Social Media?
Dragons Rescue Riders: Heroes of the Sky Animated Show Gets Release Date at Peacock
Nicole Richie on Y2K Fashion, The Real Housewives, and Living the Actual Simple Life
An Ode to Stanford Blatch’s Style