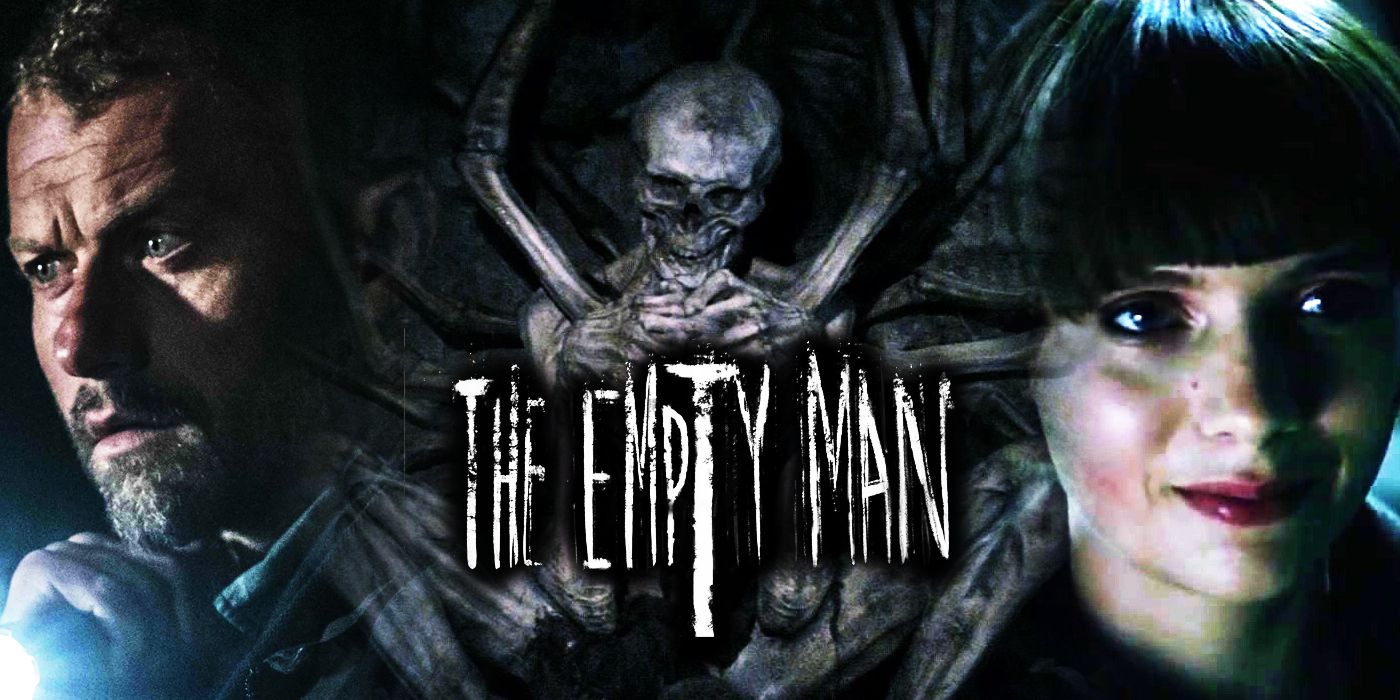 The Empty Man was released in October of 2020, but just recently dropped on HBO Max. The feature film debut of director David Prior, The Empty Man follows an ex-cop (James Badge Dale) as he uncovers a sinister cult connected to the deaths of some teenagers and the disappearance of a young girl. The story, based on the graphic novel of the same name by Cullen Bunn and Vanesa R. Del Rey, incorporates a number of horror subgenres. On one hand, The Empty Man is a boogeyman tale in which a group of teenagers her an urban legend and summon the titular Empty Man, who begins to influence the teenagers into making drastic and deadly decisions. On the other hand, the film is reminiscent of Ari Aster’s films Hereditary and Midsommar, in which the primary antagonists of each film are cults. These subgenres are intertwined with a detective-crime premise, as Dale’s James Lasombra is a damaged, cynical ex-cop at the heart of the story. With so many plot threads at play here, The Empty Man warrants some explanation to clarify exactly how the cult, boogeyman, and detective elements work together to deliver a haunting film about grief and loss.

RELATED: The Collider Podcast, Ep. 310 – Why We Lost Our Minds Over ‘The Empty Man’

When The Empty Man begins, it almost feels like an entirely different movie. But as the prologue unfolds, it’s clear that these opening scenes set up the mythology, mechanics, and origin story for the film’s supernatural big bad. In 1995, four friends go on a hike in the mountains of Ura Valley, Bhutan. When Paul (Aaron Poole) hears a faint whistling, he follows the sound into a cavern in the mountain. One of his friends Greg (Evan Jonigkeit) goes down to rescue him, only to find Paul sitting in front of a strange shrine to a large skeleton, its many limbs positioned symmetrically around it. “If you touch me, you’ll die,” Paul whispers. Greg, ignoring Paul’s warning, carries his friend out of the cave. But Paul remains mute and limp, and there’s a snowstorm coming. The group of friends finds shelter in an abandoned cabin. Upon inspecting Paul’s body for injuries, Greg notices scars on his wrists — signs of past or even recent psychological issues. This is an important detail, as is later revealed in the film, the Empty Man looks for people who are vulnerable.

Day one ends with the group of friends sticking out the storm in the cabin. Before she goes to sleep, Paul’s girlfriend Ruthie (Virginia Krull) finds a whistling instrument and blows through it. On the second day, Greg and his girlfriend Fiona (Jessica Matten) leave the cabin in search of help. While they’re away, Ruthie goes outside in the snowstorm, thinking she sees someone in the distance. But it’s not just someone. It’s an entity shrouded in black ominously walking towards her faster and faster. Once Ruthie retreats back into the cabin, Greg and Fiona arrive but don’t believe what she saw. On the third day, Paul disappears from the cabin. His friends find him sitting in front of a bridge, blowing into the whistling instrument. Before Greg and Fiona can find out what’s really going on, Ruthie reveals a knife and kills them before throwing herself off the cliff. Paul is the only one left alive, though he most certainly isn’t Paul anymore but merely a shell for the Empty Man.

The rest of the film departs from the opening’s setting and characters and takes place 23 years later in Webster Mills, Missouri. Despite this departure, the story maintains the same three-day structure leading up to the Empty Man’s final resurgence. We follow James Lasombra (Dale), an ex-cop who recently lost his wife and son in a car accident. Of course, this vulnerable state makes James an ideal victim for the Empty Man. He even celebrates his birthday by himself at a diner. His only friend, it seems, is Amanda (Sasha Frolova), the daughter of his neighbor, Nora (Marin Ireland). When Amanda runs away, her mother enlists James, in cooperation with the local police, to find her.

Day one begins with James’ investigation. He finds the words “The Empty Man made me do it” painted with animal blood on Amanda’s bathroom mirror. He also finds a flyer for the Pontifex Institute in her journal. When he finds one of Amanda’s friends at school, James asks her about the Empty Man. Davara (Samantha Logan) describes how the Empty Man is some sort of urban legend. In order to summon him, you go onto a bridge and blow into a bottle. Davara mentions that’s exactly what she, Amanda, and the rest of their friends did. In search of Amanda’s other friends, James goes onto the bridge where they had been that night, only to find their dead bodies hanging below the bridge. However, Amanda is not one of them. That night, Davara is eventually possessed by the Empty Man, stabbing herself multiple times with a pair of scissors. Like James, the police have no clear answers either. Commenting on other related deaths attributed to the Empty Man, Detective Villiers (Ron Canada) states, “We can’t indict the cosmos.” That night, James thinks there’s an intruder in his house, perhaps the Empty Man himself.

On day two, James pays a visit to the Pontifex Institute. During one of their services, he finds out its members worship the Empty Man. Not only is he a boogeyman of urban legend, but some sort of religious icon for the cult. He confronts the leader, Arthur Parsons (Stephen Root), who explains how The Empty Man calls out to certain people from a different realm. Before leaving, Parsons mentions how glad he is to see James again, though James thinks it is his first time at the Pontifex Institute. After exploring the building, running into groups meditating and calling out to an entity in the dark, James is kicked out. Outside, he meets Garrett (Robert Aramayo) who informs James that Amanda is part of the cult and taken to a camp in the wilderness. James goes to the camp and in one of the cabins, he finds a file cabinet with an empty folder with his name on it — another clue that, as the cult leader hinted at, James has been part of the Pontifex Institute before. Outside, just as the day turns into night, he witnesses a fire ritual with members shrouded in darkness who ultimately chase him out of the wilderness.

On the third and final day, James follows Garrett and other cult members to a hospital. They kneel before a bedridden man, who we recognize as Paul, first possessed by the Empty Man 23 years ago in Bhutan. James kidnaps Garrett, who explains that Paul has been some kind of gateway, an “antenna,” for the empty man to enter our world. James goes to the hospital himself and finally finds Amanda tending to the bedridden Paul. She explains that the Empty Man is in need of a new vessel, as Paul is reaching his end. Amanda and the Pontifex Institute have been preparing and grooming James to be the next vessel, the next Empty Man. Amanda knew that James had an affair with her mother Nora, and that he had not been with his wife and son because of the affair, which ultimately led to their deaths. Using James’ trauma and grief, she and the cult were able to brainwash him and made him a “Tulpa,” a blank slate for the mythical being to occupy. As it turns out, everything about James has been fabricated. From his affair with Nora, to his birthday three days ago, to his tragic backstory of grief and loss from the deaths of his wife and son — the Pontifex Institute molded James, who might have been someone else entirely before the events of the film, to become an empty vessel for the ancient spirit. After this revelation and a series of hallucinations, the Empty Man finally takes over James as his followers at the hospital kneel before him.

For a film titled The Empty Man, the movie is full of plot points and twists. It’s a juggling act of subgenres, characters, timelines, and plot threads. But underneath these complicated layers, The Empty Man is about how one chooses to cope with grief, loss, and trauma. Like the boogeyman in such horror movies as The Babadook, The Empty Man — a spirit of pure darkness in a black cloak — is the symbolic personification of the internal, psychological darkness that many people face in everyday life. Paul, the Empty Man’s first vessel, has scars on his wrists as a result of past mental health issues. James, after the loss of his wife and son, becomes a disgruntled ex-cop living alone and having nightmares from his past. The Empty Man comes to those most vulnerable to this darkness, those who seemingly have nothing left to live for. In a sense, his victims are ones who are already living a life of emptiness and unfulfillment.

This is also how the film’s cult elements become relevant, as cults also use people’s vulnerabilities to garner a sense of community and belief. Ari Aster taps into this cult mentality in his films Hereditary and Midsommar, where people and relationships tinged by loss are co-opted into cults with nefarious intentions. In The Empty Man, James Lasombra is seemingly satisfied with living his life alone. Though he reconnects with Nora once her daughter goes missing, James still pushes her away. Even when cooperating with the police force, James prefers to work alone as a rogue agent outside the law. But as the film unfolds, it is revealed that James did seek out a community in the Pontifex Institute. He lent himself to the cult’s mission to summon the Empty Man. For some people who feel a sense of emptiness in their lives, they look for meaning and fulfillment in the concept of shared belief in something bigger than themselves. Such is the danger of cults and the pitfalls of being alone during a time of great loss and trauma.

David Prior’s feature directorial debut is a juggling act of psychological horror and the occult. It poses questions about the nature of belief, whether in an urban legend about a boogeyman or in a cult’s mission to resurrect an ancient supernatural being. The Empty Man is definitely a difficult watch, not because of its horror elements — though there is no shortage of disturbing death scenes and ritualistic imagery — but because of its dark themes and depictions of loss, grief, and mental illness.

KEEP READING: The 7 Best New Movies to Watch on HBO Max in July 2021

Exclusive: ‘Waterworld’ TV Series in the Works With Dan Trachtenberg Attached to Direct

Producers John Davis and John Fox are planning a show that would follow the characters from the 1995 movie 20 years later.

Patrick Caoile is a freelance writer for Collider. While he calls New Jersey his home, he is now pursuing a Ph.D. in English–Creative Writing at the University of Louisiana at Lafayette. When he’s not at a theater or investing hours in a streaming service, he writes short fiction. His recent short story can be found in storySouth.