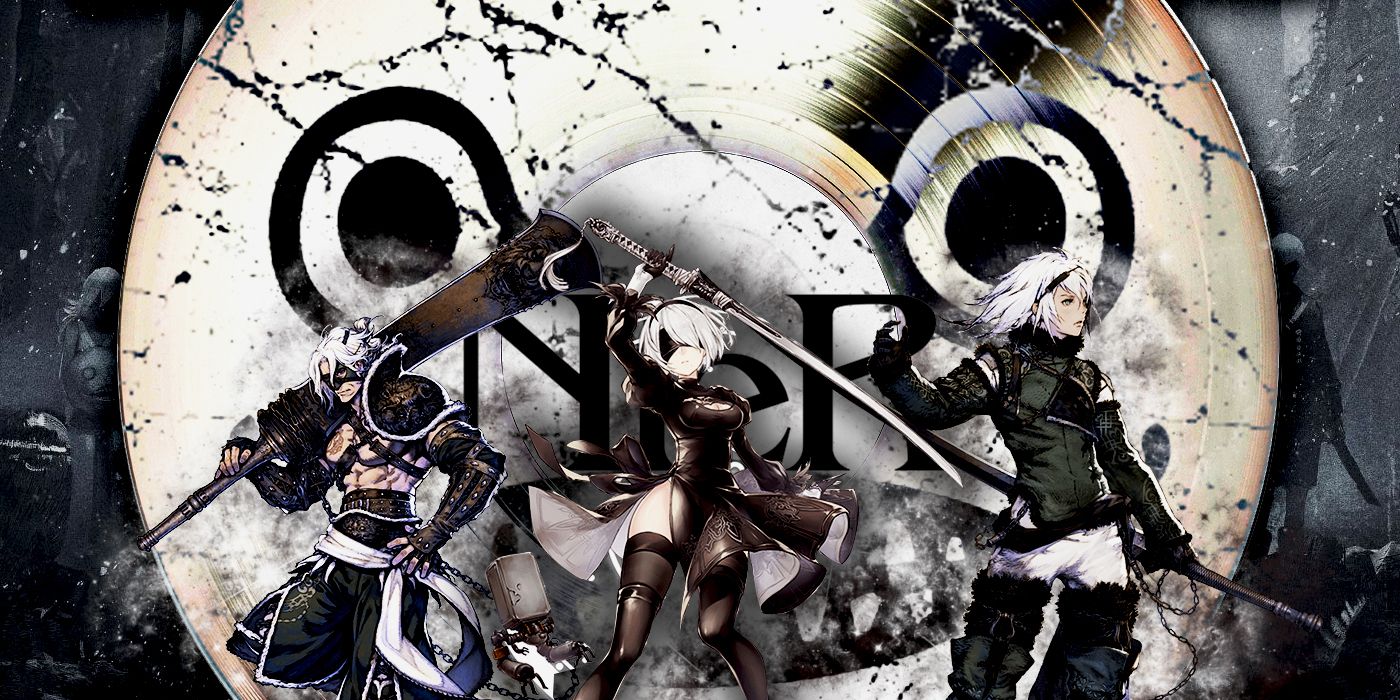 If video game music received the same attention that film scores do, NieR series composer Keiichi Okabe would be up there with the likes of John Williams, Howard Shore, and Hans Zimmer. He’s that good. Of course, he’s not alone: The members of his studio, MONACA, were instrumental in establishing the franchise’s unmistakable, irreplicable soundscape. Vocalists like Emi Evans, J’Nique Nicole, and Nami Nakagawa deserve their share of the credit as well, singing in the games’ made-up language as if they were native speakers.

It’s all so incredible that choosing the 10 best songs from NieR Gestalt / Replicant (Replicant from here on for simplicity’s sake), NieR:Automata, and NieR Re[in]carnation feels like a grievous crime against every other song in the franchise. So, before we begin, a few honorable mentions—one each from Replicant and Automata, and three from Re[in]carnation since none of its songs made the list (make no mistake, though, it’s a stellar soundtrack).

Also, only one version of each song is allowed—so, for example, including “Faltering Prayer / Dawn Breeze” would exclude “Faltering Prayer / Starry Sky” (neither earned a spot, but man are those excellent songs). Without further ado, here’s the best of the best NieR has to offer.

Some spoilers for Replicant and Automata ahead!

With a title like “Dependent Weakling,” you’d expect this song to be fragile, plinking along so as not to break anything or hurt anyone’s feelings. You’d be wrong… but not entirely. The song pounds forward, shoving aside everything in its path and stomping on the very idea of weakness. Yet there’s a sense of desperation underlying the strong percussion and non-stop strings, prevalent in the cries of the chorus.

Considering it’s Eve’s boss theme, that makes a lot of sense. Without his brother Adam—who 2B showed no mercy toward in retribution for kidnapping and mutilating 9S—to guide him in their journey to understand humanity, Eve lashes out. The musical contrasts in “Dependent Weakling” help unmask his rampage for what it really is: a tantrum stained by grief.

Replicant may be the fantasy to Automata‘s sci-fi, but the former’s Junk Heap is filled to the brim with robots and machinery. Naturally, then, the music you hear when you step inside the abandoned military base there is a little more technological, per se, than the rest of the soundtrack. Indeed, “The Wretched Automatons” planted the seeds that would eventually grow into the likes of Automata‘s “Wretched Weaponry,” yet it remains an amazing piece in its own right.

Metallic whirrs, clangs, and booms resonate alongside the instrumentation, as if someone suddenly decided to play music over a factory’s loudspeakers. Though the accompanying vocals are sung in NieR‘s original language, they manage to elicit feelings of synthetic and organic life coming to blows—which is exactly what happens when the characters go inside.

“A Beautiful Song” is more than just beautiful: it’s operatic, it’s haunting, and it’s devastatingly sad. It plays when 2B and 9S fight Beauvoir, a large machine so obsessed with beauty that she killed other, smaller machines and adorned them like jewelry.

The song is intimately tied to the fight in not only a thematic sense, but a gameplay one. Beauvoir’s movements and attacks sync up with it in such a way that losing to her over and over is actually beneficial, as it helps you learn her attack patterns—for a while, at least. Once she’s on the ropes, Beauvoir abandons all preconceived notions of beauty and goes off the rails.

Evans and Nicole’s vocals are what really pull the song together. Beauvoir is dressed like, acts like, and even sings like an opera singer; the vocals reinforce all that perfectly. Were the two to perform “A Beautiful Song” for an opera-going audience with no knowledge of video games, they’d no doubt be applauded with a standing ovation for the ages.

“Voice of No Return / Guitar” diverges from the original version in three main ways: it’s about a minute longer, there are vocals in place of strings, and the titular instrument is given more room to breathe. While strings can produce some of the most beautiful sounds in the orchestra, vocals and acoustic guitar are arguably far better suited for when both versions of the song first play. The regular version: after 2B and 9S spare a machine taking care of wounded animals. The guitar version: Pascal speaks with some of his village’s children. These are pastoral scenes, and acoustic guitars bring that sort of small village life to mind much more than orchestral strings do.

Comparisons aside, “Voice of No Return / Guitar” is just so… relaxing. It has an almost lullaby-like quality to it, imbued with a quiet energy unmatched by most other songs in the franchise.

Debating whether Replicant‘s original soundtrack or the redone music for Ver. 1.22… is better is a can of worms we won’t open here, but in the case of “Kainé / Salvation,” it’s pretty safe to say Ver. 1.22… has a leg up. Both renditions are wonderful, yet Ver 1.22… sprinkles in just enough extra instrumentation—strings near the beginning, a chorus and woodwinds when the refrain hits—to result in a redo that’s simultaneously faithful and refreshing.

Either way, “Kainé / Salvation” works extraordinarily well as a character theme. There are plenty more throughout the franchise, like Yonah’s and Pascal’s, but this one encapsulates who Kainé is when we meet her, who she becomes over the course of the game, and who she might be after Replicant‘s ending (which, not to potentially crack another can of worms, Ver. 1.22…‘s additional content vastly improves upon). That’s the power music alone can have.

“Ashes of Dreams” features some stunning instrumentals, but as one of the few songs sung in actual languages (English, Japanese, French, and Gaelic), its lyrics are also worthy of note. As Evans stated in an interview, “One of my strongest memories from [working on Replicant] was the incredibly tough time which I had writing the English lyrics to ‘Ashes of Dreams!'” Without the veil of NieR‘s nonsensical language, the pressure was on for her to not only lend her gorgeous voice to the song, but craft a story as well—one devoid of all hope.

To say the least, Evans did a spectacular job. The lyrics are as depressing as they come, but thanks to her vocals and the sonorous instrumentation, “Ashes of Dreams” doesn’t at all come off as edgy—which it absolutely could have in the wrong hands. Let’s just hope the bleak future she sings of never comes.

Post-apocalyptic though it may be, the world of Automata is ethereally beautiful. Despite the ongoing wars between the machines and the androids, Earth has had millennia to recover from the ills of man. Overgrown vegetation coils around dilapidated buildings; even the largest wildlife roams free, cordoned off by nothing and no one; bodies of water sparkle in the sunlight, the taint of pollution a distant memory. It’s no less stunning the hundredth time than it was the first, thanks in no small part to “City Ruins / Rays of Light.”

Every element of the song, from the gentle pluck of the guitar to the rhythmic patter of the percussion, invites exploration of the broken yet bountiful world. The vocals accompany you along the way, as if making conversation while you uncover the secrets under every nook and cranny. It’s the kind of song you want to play while on a road trip, or crawling the streets of an unfamiliar city, or experiencing anything new. And just like the city ruins themselves, it never gets old.

Close your eyes while listening to “The Tower.” No peeking.

Now, imagine yourself ascending a seemingly endless set of stairs. Your first steps are slow, tentative—understandably so, as you have no knowledge of what awaits you up above. Rather than fear the unknown, however, you gradually come to an understanding of sorts: No matter what it takes, and no matter what awaits you, you will reach the top.

Emboldened by this self-imposed mission, you unconsciously take each step not faster, but more confidently. Gone is the trepidation you felt looking up, and the temptation to look down is all but nonexistent. There is only you, the stairs, and the tower. What you’re doing isn’t easy, but it is doable. You can handle it. You want to handle it.

Though you can’t quite see it, you sense the top is near. As if on cue, you hit flat ground. You’ve arrived. The spiral stairs that once surrounded you, then comforted you, are gone, replaced by… space. Air. Possibility—not seemingly endless, but truly so.

Alright. Open your eyes. How do you feel?

NieR is a franchise that’s not afraid to bend genre—not just story-wise, but with gameplay. Emil’s manor is one of the most prominent examples: Step through the foyer, and the camera suddenly goes full Resident Evil, fixed angles and all. The music sheds its skin in keeping with the classic horror game feel, yet retains its Nier-ness, resulting in a haunting melody: “The Ultimate Weapon.” It isn’t until the characters discover the secret lab beneath the courtyard, however, that the song completes itself.

It could be the unfaltering march of the percussion, or the eerie pull of the strings, or the otherworldly canter of the vocals, but “The Ultimate Weapon” feels suspended… somewhere else, like sounds are trickling in from another plane of existence. That sensation is at once alluring and chilling, promising contact with things beyond our understanding whether we like it or not. At the same time, the song teases out feelings and emotions we’re all too familiar with: longing, sadness, the inevitability of change. Skirting that line between the tantalizing unknown and reality’s woes is what makes “The Ultimate Weapon” so phenomenal.

A redheaded woman perches on the edge of a fountain, strumming her guitar as children and dogs chase each other. Her voice shimmers like an angel’s wings, blessing all around her with a touch of divinity. Though she sings in a forgotten language, it almost feels as though… you know this song. Like it’s been around for a long, long time—and it has. In-universe, at least.

As the woman, Devola, explains, “Song of the Ancients” is as old as its name, weaving the tale of a black book that rent the world asunder, and a white book whose task was to stitch the pieces back together. Her saying that is one thing; the song actually managing to feel like it has a history behind it is another thing entirely.

Every version of “Song of the Ancients” is magical, but what gives “Devola” the edge is how personal it is, as if she’s sharing a secret part of herself with the world. You’ll hear it as the protagonist walks around his home village, but the vocals only flow in—diegetically, mind you—whenever he’s near Devola. She’s attached to the song not only because of its inherent beauty, but because it reminds her of her twin sister, Popola, who’s now so busy that they can’t sing together anymore. (Complete the side quest “The Ballad of the Twins,” however, and Popola will join her sister for “Song of the Ancients / Hollow Dreams,” automatically and inarguably making it the best side quest in Replicant.) You’ll inevitably become attached, too—to both the twins and the song, which only makes the final time you hear it in-game hurt that much more.

It’s just… just a transcendent piece of music. Like absolutely nothing else.

Plus, will fans get to see Dwayne Johnson and Henry Cavill fight onscreen?

Benny Regalbuto wishes he was Nathan Drake, but he’s much better at writing than discovering lost civilizations. (Still, sic parvis magna.) A freelance writer and editor, he works on a novel during whatever free time he can scrounge up.