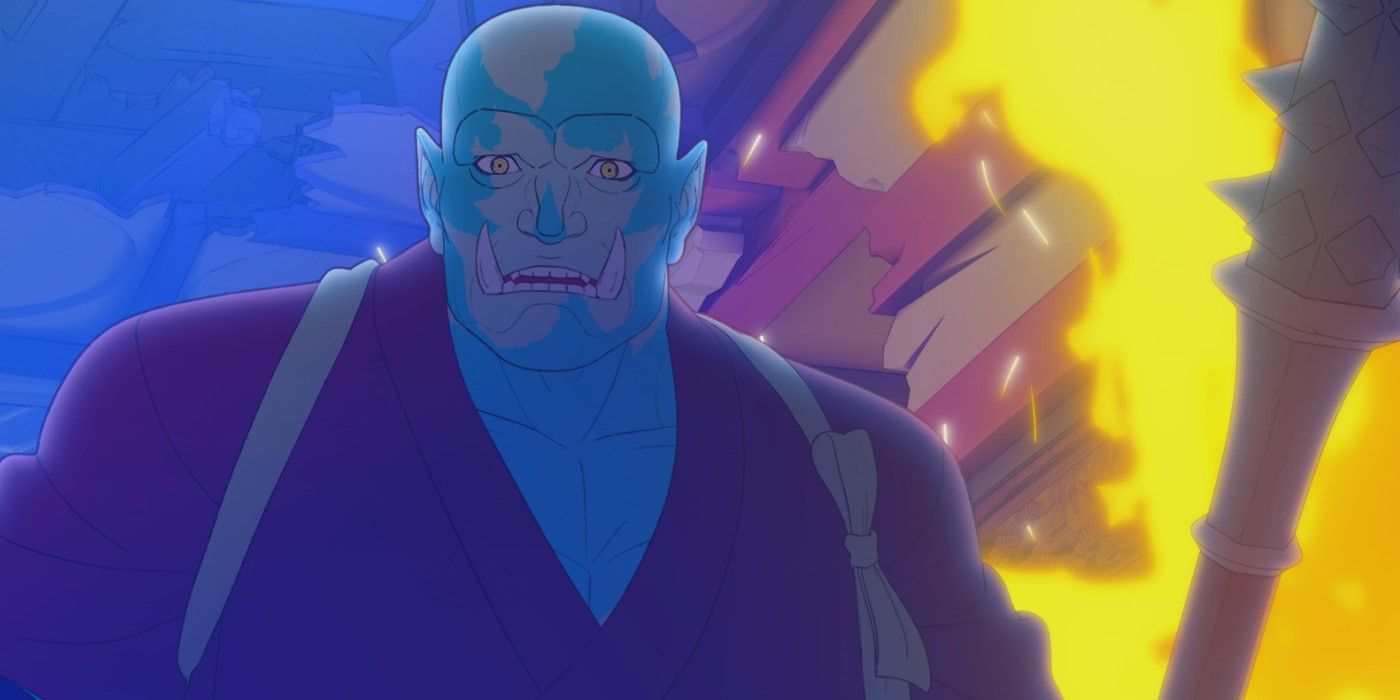 Netflix really doesn’t want the Bright IP to fade from public consciousness, and the sequel’s taking too long to get off the ground. So the streamer has released the trailer for a new anime spin-off film for you to watch in the meantime. Titled Bright: Samurai Soul, the animated adventure is set in “the same magical world” of the 2016 live-action film, and features the voice talents of newly-minted Marvel star Simu Liu.

Directed by Kyohei Ishiguro and written by Michiko Yokote, Bright: Samurai Soul will wander onto Netflix on October 12. Liu voices Izou, a one-eyed samurai who goes on a mission with an orc named Raiden (Fred Mancuso) and an elf girl (Yuzu Harada) who is in possession of a magic wand that could reshape the future of the world. The film is “set in Japan during the end of the Shogunate and the beginning of the Meiji period” and is said to utilize a new animation style that “fuses the characteristics of Japanese woodblock print art with 3DCG technology.”

The nearly two-minute trailer certainly focuses more on the action than the world-building, and sort of expects you to be familiar with the Bright universe, in which humans and orcs co-exist with other mythical creatures in a new social order. The original film, starring Will Smith, Joel Edgerton and Noomi Rapace was laden with blunt social commentary about class, filtered through the modern-day Angeleno lens of director David Ayer.

RELATED: ‘Bright’: Here’s Why Joel Edgerton Will Always Be an Orc to Margaret Cho

It was poorly received, although Netflix insisted that it was popular among fans. Edgerton in a 2018 interview with Collider said that the movie got “extra critical hate.” He said, “I think Bright is maybe a movie that needs to be reviewed by public opinion rather than viewed through the highbrow prism of film criticism.”

Nevertheless, a sequel was green-lit, but a series of setbacks cropped up — writer Max Landis was accused by several women of sexual misconduct, Smith’s packed schedule played spoilsport, and Ayer dropped out. In 2018, Netflix recruited Evan Spiliotopoulos to write the sequel, and in 2020, Louis Leterrier was hired to direct with Smith and Edgerton confirmed to return.

It remains to be seen if there’s still an appetite for more Bright stories, but you can check out the trailer for Bright: Samurai Soul here, and read the official synopsis below:

In the time between the fall of the Shogunate and the rise of the Meiji era, a powerful bright light emitted from a wand brings an end to the long Shogunate period to avoid further bloodshed as Japan begins to shift toward a new era. Amid these circumstances, a one-eyed wandering ronin named Izou, who has lost his reason to live, and Raiden, an orc who detests murder and hopes to leave a life of thievery behind, separately meet a young elf girl named Sonya around the same time. Together, they go on a journey along the Tokaido road to bring her and the wand she holds safely to the land of the elves in the north. Standing in their path is the mysterious organization Inferni, which aims to obtain the wand and revive the Dark Lord, who intends to rule all of creation. Inferni also uses the new Meiji government in its attempt to steal the wand from Izou, Raiden and Sonya. Traveling along the Tokaido road from Kyoto to Yokohama, Izou and Raiden begin their journey to protect the wand.

KEEP READING: What We Want to See in ‘Bright 2’: More Mythology, Less Fairy-Bashing

‘Scenes From a Marriage’ Review: HBO’s Remake Is Unnecessary, But the Performances Make It Feel Essential

Hagai Levi’s take on an Ingmar Bergman classic is bolstered by two incredible performances by Oscar Isaac and Jessica Chastain.

Meghan Markle and Prince Harry Match in Black to Visit One World Observatory
Kirby: The Forgotten Land Switch Trailer Brings the Character to 3D
Operation Mincemeat About Bizarre WW2 Mission Gets First Images
The Best Tips We Have Learned About Migraine Self-Care During the Pandemic
14 Tee-rific Gifts For the Golfer In Your Life — These Finds Are Truly Ace-Worthy