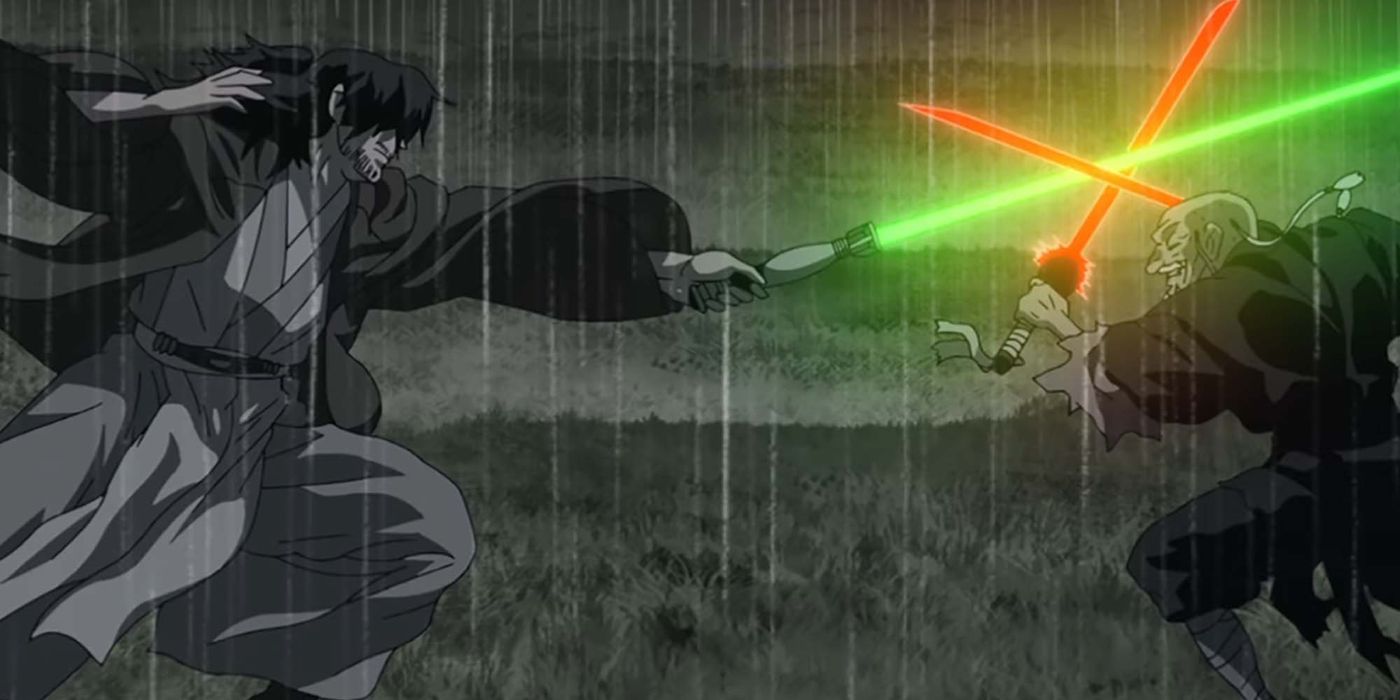 With the impending release of Star Wars: Visions, a new deep dive gives fans a look into the villains of some of the episodes. Speaking with co-executive producer Justin Leach, StarWars.com offered insight on the antagonists of the upcoming anime anthology series, introducing five of the dynamic characters whose presence will undoubtedly be felt. Star Wars: Visions will debut with a total of nine shorts on September 22, exclusively on Disney+.

This article discusses details pertaining to both story and characters for Star Wars: Visions.One character known as The Elder appears prominently in the episode of the same name, one of the two episodes being produced by Studio Trigger (Kill la Kill) and is described as “a master swordsman seeking worthy adversaries,” Leach said. Although he appears to be an elderly old man, he moves skillfully against his enemies — and seems more intent on mastering his own abilities rather than falling in line with either the Jedi or Sith. According to Leach, The Elder’s katana-shaped lightsaber “is a wonderful tribute to the original source material that inspired Star Wars.”

“The Twins,” another Studio Trigger short, revolves around Karre and Am, two siblings raised in the ways of the Dark Side. While Karre was able to walk away from this upbringing, his sister became consumed by her lust for power. When discussing Am, Leach revealed that she “takes being a Dark Lord to the next level with her drive, ambition, and skill on a scale that could only be expressed through anime. It flips the classic Star Wars twins upside down in a way that is new and exciting.”

Masago will be the villain in the “Akakiri” short by Science Saru (Devilman Crybaby) and believes that their ambitions of conquest are not simply a want, by her destiny. “Like other great villains within the Star Wars universe, she believes in this principle and uses it as an argument against her enemies when she tries to recruit them,” said Leach.

The other Science Saru short is titled “T0-B1,” which shares the name with the short’s lead character, a droid who pretends to be a Jedi. This enemy is one that Star Wars fans have become quite familiar with, and like those other Inquisitors, this one is ready to destroy all in their path. “His design is reminiscent of a medieval black knight with modern details,” Leach said.

The talk of the Star Wars: Visions trailer that was released a few months back was the lightsaber umbrella. Well, that piece of unconventional tech belongs to the nameless Sith Bandit Leader in “The Duel” by Kamikaze Douga (openings for JoJo’s Bizarre Adventure). Leach described her as “a cool and cunning assassin reminiscent of the famous female warrior from Japanese cinema in the ‘70s, Lady Snowblood.”

Star Wars: Visions is a nine-episode anthology series that tells stories from all across the galaxy with acclaimed anime studios at the helm, each bringing their own flair and style to the Galaxy Far, Far, Away. The entire series will be streaming on Disney+ on September 22. You can watch the English trailer for Star Wars: Visions below:

Just in time for Halloween.