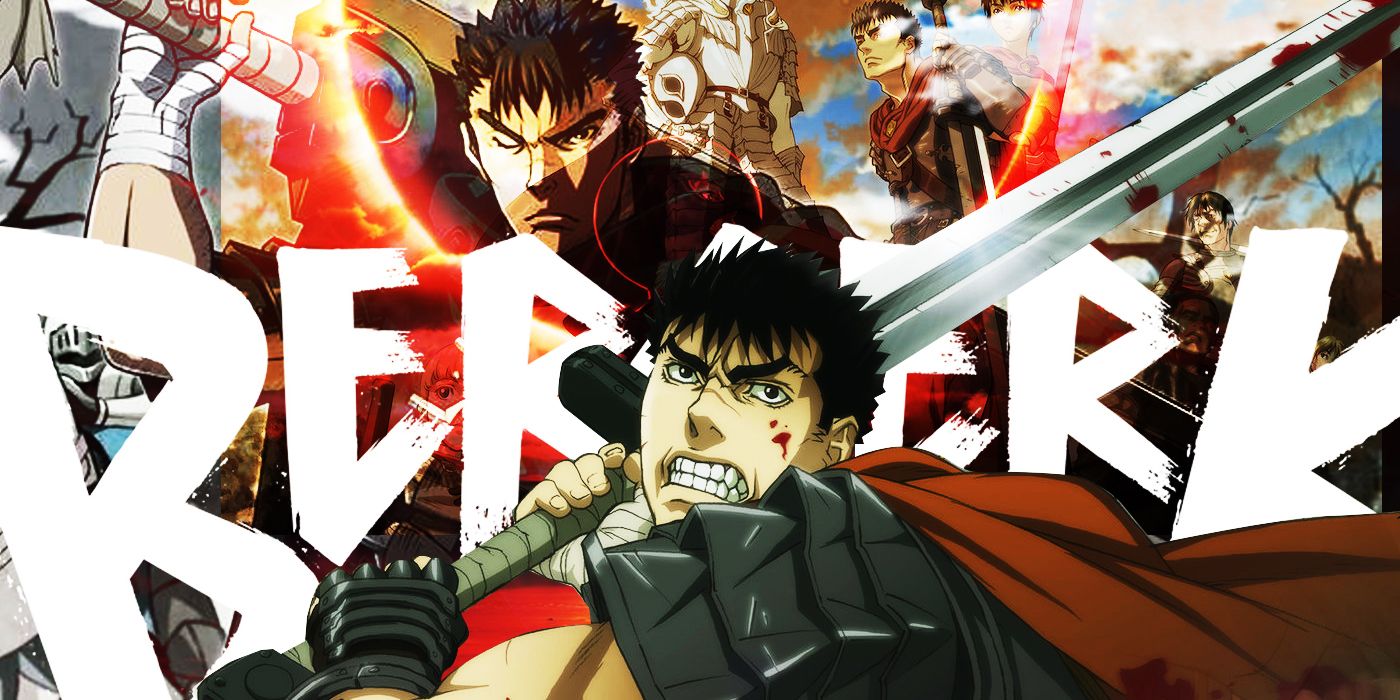 Ichigo Kurosaki, Cloud Strife, Black Clover’s Asta and Devil May Cry’s Dante. What do all of these characters have in common? They’re all badasses that wield huge swords. It’s a trope that has become a staple in anime and JRPGs (Japanese Role-Playing Games). After all, what’s cooler than a main character toting around a larger than life sword that, more often than not, only they can handle? This trope has become so popular that people often don’t consider where it comes from. However, as with all tropes in anime, they have to originate from somewhere, and in this instance, that somewhere is a series titled Berserk.

Berserk is a dark fantasy series based on the manga by Kentaro Miura, and was originally aired in 1997. The show explores themes of despair, tragedy, and suffering, but also hope, friendship, and resilience. It follows the story of Guts, a mercenary destined to be burdened with suffering and death, as he moves throughout his life. It especially focuses on his relationship with a man named Griffith, a friend and ally turned enemy, whom Guts has vowed to destroy. The series is known for its blending of fantasy, horror, brutality, style, and storytelling, and has earned a place as one of the most influential pieces of dark fantasy media. Berserk’s main character, Guts, is where the aforementioned giant sword trope stems from. Guts is known for wielding the Dragon Slayer, a sword so large and heavy that it usually takes two or more people to handle it. However, Guts can wield it with just one hand. This imagery of a strong, brooding swordsman swinging a larger than life sword with ease has become iconic. It’s wildly cool, powerful and exhilarating. That’s why it’s no surprise that it’s become commonplace in anime and video games.

There’s plenty of examples of this. Final Fantasy’s Cloud Strife carries the comically large Buster Sword, which bears some resemblance to the Dragon Slayer. Cloud also shares some similarities with Guts himself, such as them both being mercenaries. Black Clover’s Asta also wields a large sword with a design similar to the one Guts uses. In addition, Asta is a member of the Black Bull Magic Knights squad and takes on a form where he becomes cloaked in black anti-magic. Guts is also known as the Black Swordsman, so this use of black clothing and armor could be a reference to him, as well. While not necessarily a huge sword, Blue Exorcist’s Rin Okumura wields a sword that no one else can, and has similar struggles to Guts, such as dealing with his destiny of evil origins. Perhaps the most clear example of this trope being influenced by Berserk, though, is its presence in the Dark Souls series. The video game series draws a lot of inspiration from Berserk in general and includes several references to the series, but there’s quite a few references to large swords similar to Guts’. For example, the game’s Greatsword is modeled after the Dragon Slayer. However, in terms of badass swordsmen, Dark Souls’ Artorias bears a striking resemblance to Guts with his huge sword and black armor. The list of characters who fall under this trope could go on forever, and it covers so many series, such as Bleach, Bloodborne, and Devil May Cry.

However, Berserk’s influence goes much further than just the “main character with a giant sword” trope. Many of the series people love today might not have existed without Berserk. Many creators, such as Ryōgo Narita (Durarara!!), Hajime Isayama (Attack on Titan), and Yana Toboso (Black Butler), have claimed to be inspired by Berserk in terms of design, themes, and storytelling. Series such as Demon Slayer, Jujutsu Kaisen, and Fullmetal Alchemist, which have all risen to extreme popularity among fans of dark fantasy, owe a lot to Berserk for paving the way for the genre. When Berserk was published in 1989, many manga magazines were uninterested in the fantasy genre. Had Berserk not been given a chance by a struggling publication (Monthly Animal House), it would not have reached the heights it has, and we wouldn’t see so many works in the genre today, animated or otherwise, and especially not in popular publications like Weekly Shonen Jump.

It also goes without saying that Berserk inspired plenty of video games in ways beyond the blades used by characters. Various creators, including Hideaki Itsuno (Devil May Cry) and Hidetaka Miyazaki (Dark Souls, Sekiro), were greatly inspired by the story, themes, and imagery of Berserk. In addition, many games have included weapons, outfits, and characters modeled after the ones found in Berserk. Final Fantasy’s Sephiroth bears a striking resemblance to Griffith, Monster Hunter’s greatsword (among other things) is heavily inspired by the Dragon Slayer Guts wields, and Dragon’s Dogma even included armor sets based upon the ones worn by Griffith and Guts.

It’s pretty amazing to see how a series like Berserk can have such an impact on a genre, despite not being the origin of it. It’s even more impressive to see how it created one of the most popular tropes seen in anime and JRPGs today: the badass with a giant sword. Guts’ sword, the Dragon Slayer, has been a template for many anime and video game series that feature larger than life swords wielded by protagonists and antagonists, such as Cloud Strife, Asta, Artorias, and Ichigo Kurosaki. However, Berserk’s influence extends far beyond just the giant sword trope. It’s an essential piece of dark fantasy media that paved the way for countless of the popular series people enjoy today, from Fullmetal Alchemist to Attack on Titan to Jujutsu Kaisen. Without Berserk, some of the iconic imagery we know and love would never have come to fruition. The success of the series proved that dark fantasy was marketable and interesting, and its popularity opened doors for the genre to come into the mainstream. So, next time you’re sitting down to enjoy an episode of Black Clover or fighting enemies in Final Fantasy with the Buster Sword, remember that those larger than life blades (and plenty of others) were inspired by Berserk’s awesome Dragon Slayer.

“This is a uniform.”

Sebastian Stoddard is an Anime Features writer for Collider. He also writes video game reviews for Popzara, where he enjoys being able to try out tons of great (and not so great) titles. When he’s not writing (which isn’t often), he can be found playing D&D, reading and researching, making and taking quizzes online, and watching documentaries about whales and dolphins. He also may or may not be thirty tarantulas disguised as a human boy…but that’s classified information.

Back Page: The Dark Secrets Of Brewster’s ‘Pigeon Milk’
13 Old Navy Leggings to Grab When “Must Have Pockets” Is on the Top of Your Wish List
Selena Gomez and Coldplay’s ‘Let Somebody Go’ Has Brutal Lyrics About Heartbreak
Kourtney Kardashian and Travis Barker Matched In Black For NYC Date Night
What If Season 2: 5 Ways to Improve the Disney+ Show