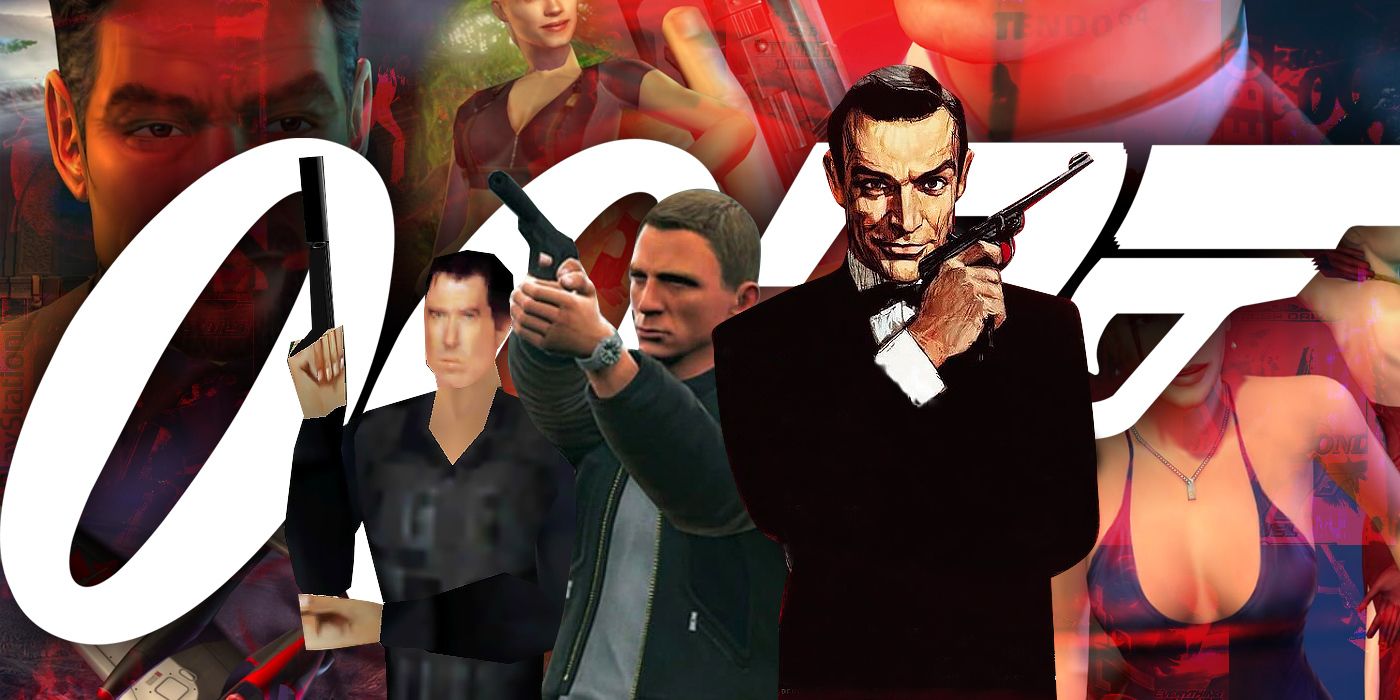 James Bond has had an extensive history not only in movies, but in the medium of video games as well. The 007 agent has had a large presence throughout the decades in video games, corresponding with the release of the films to some extent. Ian Fleming‘s character has remained of the most recognisable people to come from literature thanks to the timeless aspect of the secret agent and his world of espionage. With No Time to Die finally out in theaters, now is as good a time as any to take a look at James Bond’s history in video games with all the various titles that have been released over the years.

The 1980’s saw the first official James Bond game released, with James Bond 007 released in 1983 for the Atari consoles. The text adventure format of this first game would set the standard for the remainder of the Bond games released in the 80’s. These include: Bond 007: A View to a Kill (1985), James Bond 007: Goldfinger (1986) The Living Daylights (1987), and Live and Let Die (1988). Each of these games took inspiration from the films that were released at the time – the Roger Moore era films and even some of Sean Connery films before that. These side scrolling and text adventure games were well enough received. However, it is the next era of James Bond games that had found a true sense of popularity and belonging amongst video game players.

The 1990’s saw the rise of popularity in James Bond games, but not right away. The early 90’s saw a steady output of more of the same that we got from the 80’s such as The Spy Who Loved Me (1990), James Bond 007: The Stealth Affair (1990), James Bond Jr. (1991), and James Bond 007: The Duel (1993). Each of these were either top down action games or more side scrolling. These uninspired efforts would not be what defined James Bond during this decade, though. It wasn’t until Rare got the license for the Bond franchise that the most popular of Bond video games would come out. GoldenEye 007 (1997) released two years after the film of the same name found critical acclaim on the Nintendo 64 console. GoldenEye 007 gave players an exciting single player campaign with different objectives in higher difficulties and an inspired multiplayer as well.

The multiplayer mode is what really resonated with players, and is still considered one of the best to this day. The 4 player split screen had made it an absolute necessity for anyone who owned a Nintendo 64 console. Moreover, the game is considered to be one of the most innovative of its era and helped to establish much of the norms we see in multiplayer shooters to this day. Needless to say, GoldenEye 007 is the most inspired and revolutionary James Bond video game to date, and also the most well-known game in the entire franchise. Unfortunately, the release that followed it, Tomorrow Never Dies (1999), based on the film of the same name, didn’t exactly display the same revolutionary developments that GoldenEye 007 strived for, and in turn, it received mixed reviews as a third person shooter.

The 2000’s never quite saw the heights that the 90’s did with GoldenEye 007, although there certainly was an effort to recapture that energy with how many games released around this time. The decade saw the release of titles such as The World is Not Enough (2000) James Bond 007: Everything or Nothing (2003), GoldenEye: Rogue Agent (2004), James Bond 007: From Russia with Love (2005), and 007: Quantum of Solace (2008), to name a few. Each of these were under Electronic Arts who had the license at the time, and each tried something a little different. Each game around this time had different levels of success, especially The World is Not Enough, which had been praised mainly for emulating what had worked so well with GoldenEye 007 . The multiplayer and cooperative gameplay featured in some of these games made them successes, however after all was said and done in this era of Bond video games, there was nothing that came close to the level of success that the franchise had found in the 90’s. This era also saw the first Bond video game to feature Daniel Craig’s portrayal of the titular spy in 2008’s Quantum of Solace video game, an adaptation of the film of the same name. Much like the film, though, it didn’t exactly garner the most positive of reviews.

This last era of James Bond video games saw the level of output decrease, with only a handful of games released around this time. These included GoldenEye 007 Remake (2010), James Bond 007: BloodStone (2010), and 007 Legends (2012). Activision saw the potential in remaking the original GoldenEye, and did just that with their remake. Replacing Brosnan Bond with Craig Bond and giving the game a graphical upgrade, there was true potential for GoldenEye 007 Remake to recapture the magic of the original. While it received better reviews than some of the previous games of the 2000’s, it was unable to live up to the glory days of the game it was based upon. Moreover, the final product was a somewhat generic first person shooter akin to something like Call of Duty. Bond’s last game before going on hiatus would be 007 Legends. To coincide with Skyfall’s theatrical release, the game saw Craig’s Bond living out the adventures from films before his tenure as the 007 agent. It was an interesting premise, but the execution wasn’t all there. Because of that, the game received poor reviews, and a James Bond game hasn’t been released since.

This vast history of James Bond games has finally brought us here. After a long hiatus, James Bond is set to return to video games with a working title of Project 007 (TBA). The game was announced almost a year ago in a teaser video from IO Interactive, the studio behind the recent Hitman trilogy of games. IO Interactive is a beloved studio, known for their quality output of games and the passion put into their work. In their brief description of their upcoming game, Project 007 is said to be the first “James Bond origin story” that has players earning their double 0 status. The game still doesn’t have a release date, but just from looking at the studios previous work and the concept of the story, it seems James Bond has the chance to shine again in a wholly unique video game. Let’s hope IO Interactive can break the mould of a history of mediocre video games and leave their own positive mark on the franchise.

KEEP READING: How the James Bond Franchise’s Past Hints at the Series’ Future

Ernesto Valenzuela is a Gaming Features Writer for Collider. He’s been writing about movies, comics, TV, and video games since 2017. When he’s not doing that he’s probably watching Basketball or telling you that Metal Gear Solid 2 is the greatest game ever made. He’s an aspiring screenwriter and the father of two dogs.